iPhone 8 design rumors have been circulating the web like wildfire in recent days, with reports conflicting most notably in regards to Apple’s plans for the upcoming flagship’s Touch ID sensor positioning — among a horde of other design characteristics, including the bittersweet decision to axe the iPhone 8’s rumored curved OLED display. But a new schematic that was leaked on Wednesday morning, if indeed it turns out to be the real deal, could effectively put many of those Touch ID-related rumors to rest.

Posted by the famed but historically inconsistent serial leaker, Sonny Dickson, to his official Twitter account, the leak shows what appears to be a 2D schematic depicting the iPhone 8’s back chassis. What’s sure to stand out most of all though, is that gaping, circular cut-out plastered just beneath the Apple logo on the back of the device, suggesting that Cupertino might have unfortunately resorted to a rear-mounted Touch ID sensor after all. 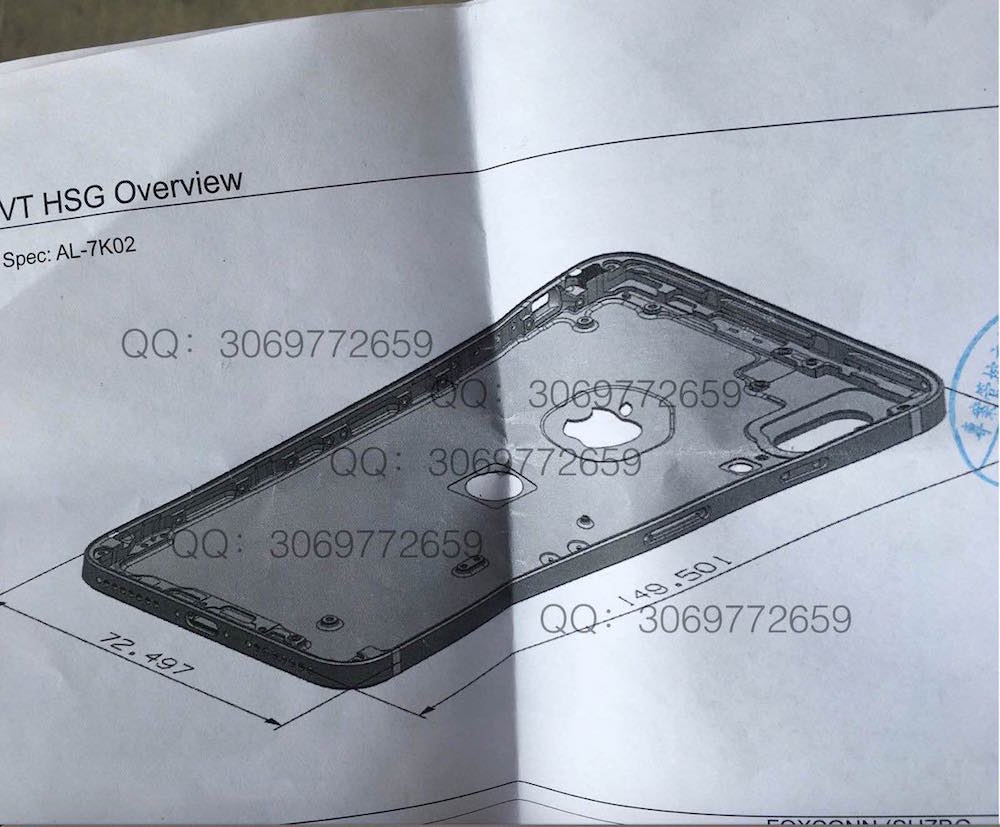 Worth noting, however, is that while the front of the iPhone 8 — which has also been rumored to be dubbed the ‘iPhone Edition’ — is expected to boast minimal bezels all the way around its massive 5.8-inch OLED display, a slew of conflicting reports have surfaced in recent weeks suggesting that, well, Apple could ultimately go one of several different routes with Touch ID.

For the record, Apple has been rumored to be working on an embedded Touch ID solution for what seems like years now; meaning that the sensor would essentially be built into the OLED display, itself, allowing the user to unlock, interact with, and carry out Apple Pay transactions on their device by merely placing their finger on the front display glass. However, it was rumored recently that due to a number of unforeseen manufacturing issues, Apple had decided to scrap the embedded Touch ID concept — instead opting for a rear-mounded fingerprint sensor, similar to a host of high-end Android devices, that would enable the company to expedite the iPhone Edition to market and release it alongside its iPhone 7s and 7s Plus counterparts this September.

Other reports, however, have suggested that Apple is in fact still working on the glass-embedded Touch ID solution; and while lower than expected yield rates have caused skepticism among some analysts, Apple could potentially still deliver the Touch ID-embedded device perhaps in October or November of this year, albeit in lower quantities to start, while unveiling it on stage alongside the iPhone 7s and 7s Plus.

The fact that Apple has been working on this under-the-glass Touch ID technology for years is a clear indication that it won’t simply settle for the status quo, though. To that end, Apple is rumored to have been working with various prototypes of the iPhone Edition, with some embodying the embedded Touch ID solution, and some featuring the sensors embedded around back — a la Samsung’s hot new Galaxy S8/S8+ flagships.

But that would be unlike Apple to simply follow in the footsteps of its fiercest rivals in the tech space, right? Therefore, as with all rumors, we highly recommend taking this rumor, too, with a heaping grain of salt, at least until the iPhone manufacturing season kicks into full swing this summer.