According to sources with knowledge of Apple’s imminent plans, the company’s upcoming iPhone 8 flagship will usher in an entirely new way of interacting with iPhone as we know it. With iPhone 8, which could also be called the iPhone Edition or iPhone X, Apple has ventured into a new smartphone form-factor category, which will not only eliminate the concept or need for a traditional, clickable Home button, but will also maximize key features like the handset’s massive, 5.8-inch OLED display by incorporating certain UI enhancements throughout iOS 11, according to a Bloomberg report.

Previously, it was revealed that the iPhone 8 will feature a front-facing notch, which will house the device’s sensor array, camera modules, and earpiece. Aesthetically, the ‘notch’ is rather obtrusive and has been the subject of quite a bit of gripe online. In other words, it’s kind of ugly, and most people were secretly hoping that Apple would find a way to mitigate that.

Then, earlier this summer, iPhone 8 hopefuls were given a ray of hope when concept images surfaced showing the iPhone 8’s notch having been camouflaged using the marvelous, dark-black qualities of an OLED display. As you can see in the image below, instead of the two “ears” on either side of the sensor notch, it appeared as if Apple could somehow use the upper-most portion of its OLED display to merely blend in with the notch. 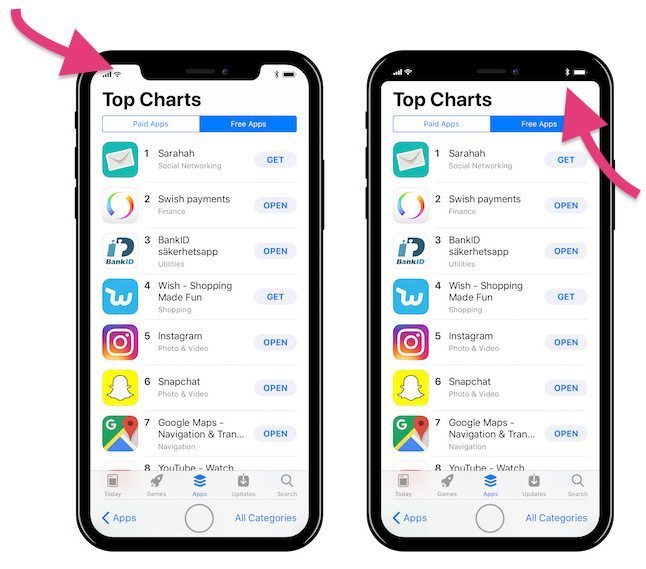 However Bloomberg’s sources were able to confirm, unfortunately, that Apple has made the “firm decision” against camouflaging the sensor bar in any way. Major bummer. And according to Bloomberg’s sources, the decision creates a number of small issues. Chiefly, the report pointed out, the notch is “noticeable during app usage,” and particularly within apps that utilize “non-black” backgrounds.

Bloomberg notes that while the status bar was designed to change color in accordance with the onscreen task, unfortunately due to size limitations within the “ears”/status bar area, there wasn’t a whole lot in the way of UI elements that Apple could fit in.

The notch fits in an area at the top of the display which is reportedly split evenly, with the iOS Clock icon going on the left-hand side, and the battery/connection status on the right.