By now, most of us who’ve seen the iPhone X can say with confidence whether we love or hate the notch. Regardless of your personal preference, it should be known to all that the notch is here to stay for the next few generations of iPhone..

While there’s plenty of evidence suggesting the notch will ultimately be slimmed down (or eliminated entirely), Apple’s fiercest rival in the phone space recently come out swinging with its own concept of a thinner, discreet, and inherently “more advanced” solution of its own.

Published by the World Intellectual Property Organization last week, Samsungs patent No. WO 2018/012719 A1 describes and illustrates a truly “edge-to-edge” OLED display design, featuring small perforated “holes” within the glass, which would house components like the front-facing camera, earpiece, speakers, and more. 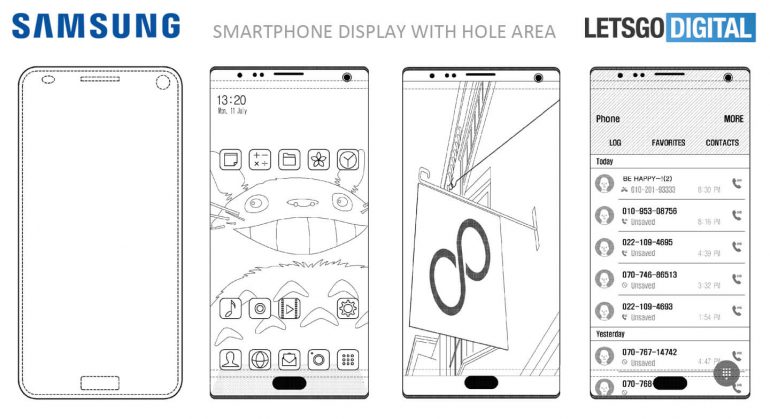 As noted by the Dutch-language tech blog, LetsGoDigital an all-screen design like this would allow Samsung to conceal its front-facing components under the glass — effectively side-stepping the need to incorporate a sensor bar like we see on the iPhone X (and to a lesser extent, on the Android-powered Essential Phone).

The patent goes on to detail other key aspects about the concept, such as how digital content like photos and videos stand to benefit from the screen’s substantially decreased “dead area” meaning the unusable screen space currently occupied by the notch.

Too Little, Too Late?

More importantly, while Samsung’s design might seem like a promising evolution in the style and functionality of its Galaxy devices, what’s described in the company’s inherent patent is — technologically speaking — just a watered-down version of what Apple is already rumored to be working on.

In January of last year, it was revealed by an Apple patent that the company may be working on a similar “perforated hole” design, describing a method by which iPhone would be able to hide these crucial components under its display glass.

Unfortunately, while Samsung’s plans are not clear from the patent, it’s still interesting to see the Galaxy maker come up with a solution which eliminates most traces of the notch.

Apple, however, is already at least 2.5 years ahead of the competition both in terms of technology and design. So while iPhone X might not be your ‘cup of tea’ for the time being, we have plenty of reason to believe the notch as we know it will see a major transformation in the years to come.