The smartphone market has long been dominated by giants, namely Apple and Samsung. But the developer of the Android operating system wants to shake things up — and today debuted a range of products hoping to do just that.

Essential, the company started by Android inventor Andy Rubin, has unveiled its first smartphone, as well as an Amazon Echo-like device and a new home operating system that it calls “Ambient.” The phone, of course, is the most anticipated of those products. It’s a high-end Android-based device with the features and specs to match. It’ll ship with the usual flagship hardware — like a Qualcomm 835 processor, 4GB of memory and 128GB of internal storage. The Essential will also come equipped with what the company calls “the world’s thinnest dual camera system,” and the front-facing selfie camera will be capable of 8-megapixel photos and 4K video.

Perhaps the most stunning feature is the device’s edge-to-edge, nearly bezel-free display (which will likely turnout to be the standout iPhone 8 feature of 2017). The Essential’s display manages to outdo even the Galaxy S8’s impressive screen by reaching the very top of the device, wrapping around the front-facing camera. Additionally, the company says that it’s built with a combination of titanium and ceramic so it can survive a drop “unlike the aluminum competitor devices,” taking an obvious swipe at Apple’s and Samsung’s flagships.

Beyond its impressive specs and display, the phone is likely to be the latest attempt at creating a modular phone. While the phone has a USB-C port, the company is also debuting a new way of connecting accessories via small metal pins. 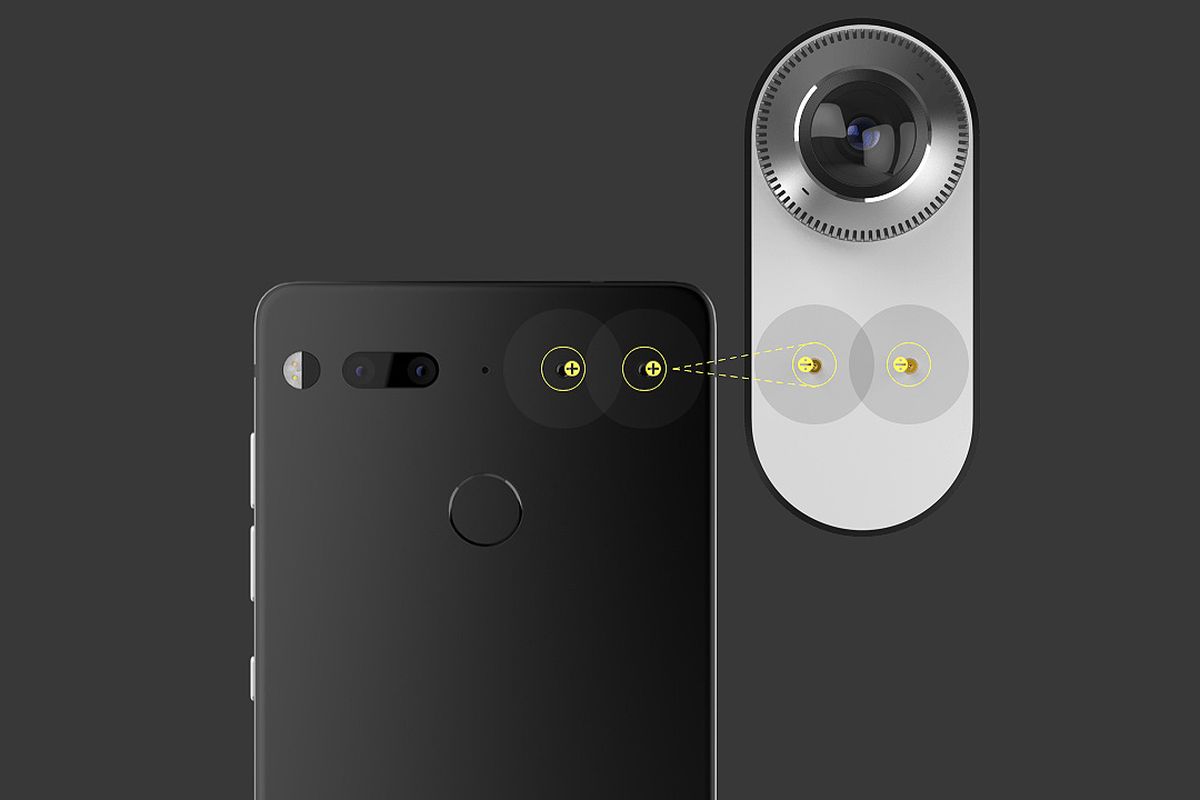 Some of those accessories will include a detachable 360-degree camera, and a charging dock with a magnetic connector. On the subject of ports, the Essential phone won’t have a headphone jack, though there will be an included dongle.. Another interesting tidbit is the fact that the phone will also lack any sort of logos or branding — and it’s worth venturing that the phone’s OS probably won’t be bogged down with sluggish, preloaded software, either.

Whether the Essential phone will be able to stand up to Apple and Samsung remains to be seen, but Rubin’s latest initiative is still exciting. It’ll retail for $699, and will launch exclusively in the U.S. to start. There’s no official word on shipping date or carrier availability, however — but it should be available for most major carriers in the U.S.