Yesterday we were given our first glimpse at what’s alleged to be a tempered glass screen protector designed exclusively for Apple’s upcoming iPhone 8 flagship. Manufactured by case-maker, Olixar, and officially available for pre-order from MobileFun as of this morning, the tempered glass protector aligns beautifully with multiple reports concerning the iPhone 8’s design, including how the device will boast a nearly edge-to-edge, 5.8-inch display, with very minimal bezels around the perimeter.

The protector, however, isn’t all Olixar has been working on recently, as the company is back this morning as one of the first firm’s to reveal an entire line of cases that it claims are “100% guaranteed” to fit Apple’s iPhone 8. Offered for pre-order by the same accessory distributor, MobileFun, the cases allegedly depict with accuracy both the front and back of the iPhone 8’s “finalized design,” citing the case-maker’s use of “information and schematics acquired through their factories and contacts in the far east” as the basis of their earlier-than-expected release.

Aside from their sleek designs, the cases also give us a great look at how the iPhone 8 will boast a design/style remarkably similar to “iPhone Edition” renders that were shared exclusively with iDrop News back in March. 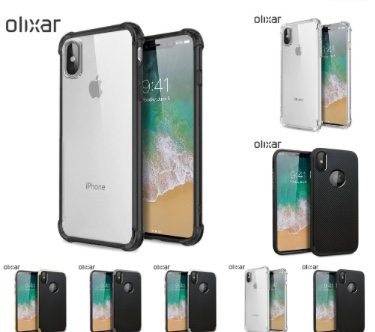 The cornerstone of the iPhone 8’s design is, of course, its massive, nearly edge-to-edge display panel, which will be of the OLED variety, and will cover nearly the entire front-side of the handset — aside from a bar at the top, which will more than likely house the earpiece, sensor array, and an advanced, dual-lens 3D camera system capable of facial recognition. Additionally, on the back-side of the device, we can see that the dual-lens camera has been reoriented to the vertical position, which first emerged as a quirky yet beneficial feature that will enable iPhone 8 users to capture some pretty amazing photos, and use AR more efficiently, when the handset is held in landscape orientation.

While we’re still a good three months away from seeing the iPhone 8 unveiled on stage, it’s not uncommon for case manufacturers to start developing their offerings several months ahead of schedule — particularly when the device in question, like the iPhone 8, is poised to fly off the shelves once its officially released. Interestingly, while Olixar claims their designs were “acquired by factories and contacts in the Far East,” the revelations come amid a fresh report that Apple has been waging war against product leakers.