Enabling one-handed keyboard mode is simple. The toggle is integrated into the stock iOS keyboard so you can enable or disable it while typing. Here’s how to do it.

How to Enable One-Handed Keyboard Mode in iOS 11

Step 1: Open an app where you can bring up the keyboard for typing, like the Notes app.

Step 2: Once the keyboard is displayed, tap and hold on the globe (or emoji) icon in the bottom left of the keyboard.

Step 3: This opens a menu to let you switch between the available keyboards. You’ll notice that there are now three new icons at the bottom of this menu, which allow you to set the keyboard mode. 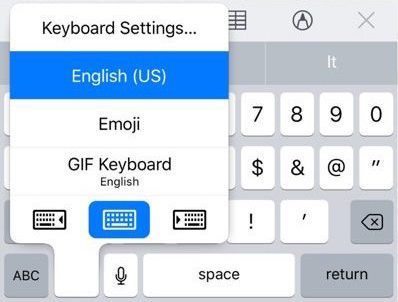 Step 4: You can tap on the first or third icon to enable one-handed keyboard. The first icon arranges the keyboard such that you can type with your left hand, whereas the third icon allows you to type with your right hand.

Step 5: After you’re done using one-handed keyboard mode, you can disable it by pressing the large arrow on the side of the keyboard.

That is how you can use one-handed keyboard mode in iOS 11. It is extremely useful at times when you cannot type with both hands, such as when you’re holding a cup of coffee in one hand and your iPhone in the other.

iOS 11 will be released to the public later this year, most likely in September. The second beta of iOS 11 is currently available to registered developers, but if you’re not a developer, you can register for the Public Beta Testing Program that will allow you to install iOS 11 onto your device without a developer account.