A new set of schematics has leaked, allegedly showing off two of the three iPhones expected to debut in the fall.

The schematics, which were obtained by Forbes’ Gordon Kelly in partnership with accessory maker Ghostek, were published over the weekend along with a few predictions about the devices they depict.

First off is the so-called iPhone X Plus, a handset rumored to apply the iPhone X’s edge-to-edge and bezel-free design to a larger form factor.

It’s largely expected to sport a massive 6.5-inch OLED display and other “modern iPhone” features. Based on the provided specifications, the footprint appears a bit smaller than the iPhone 8 Plus (6.18 x 3.03 inches compared to 6.24 x 3.07 inches).

Importantly, Kelly also contends that the iPhone X Plus schematics show off a device with a triple-lens camera setup.

As evidence, Kelly links to another schematic released by leaker Benjamin Geskin prior to the release of the iPhone X. In that schematic, the size of the flash is much smaller than the circle in Kelly’s iPhone X Plus schematic. 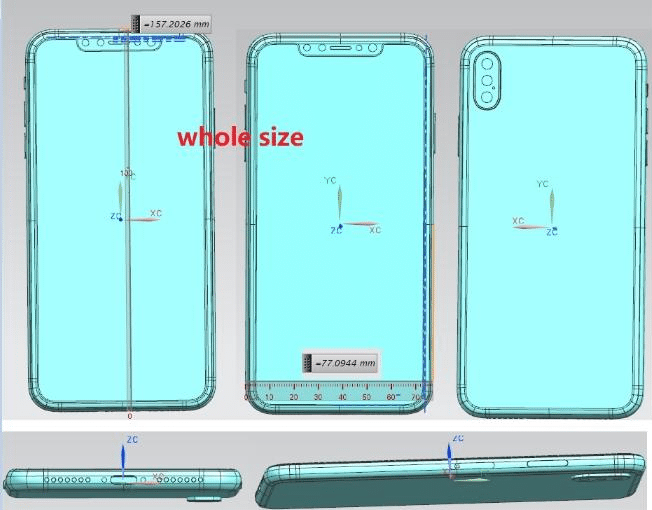 The Forbes writer goes on to claim that the flash, which could appear to the right of the lens module, is simply not pictured.

To be clear, it’s hard to outright disprove Kelly’s claim. But it does seem incredibly unlikely that a schematic obtained and used by an accessory maker would leave out a flash module. The placement of hardware components on the rear of a device is, of course, incredibly important to a case manufacturer.

In addition, it’s not clear where the schematics came from. Many case makers simply create their own schematics based on current rumors and forecasts about Apple’s plan. It’s much more rare for a third-party firm to get early access to an iPhone’s design details.

There has also been confusion about the appearance of a triple-lens iPhone this year.

There’s no concrete evidence backing up the addition of a triple-lens camera setup to this year’s iPhone X Plus. While a three-lens iPhone is rumored to be in development, those reports suggest a release date of 2019 at the earliest.

In other words, it’s much more likely that the schematic simply shows off an iPhone X Plus with two lenses and a flash — a design echoing 2017’s iPhone X camera setup. The fact that the lens appears too large could simply be a schematic error, or it could hint at the introduction of a larger flash module.

Kelly’s schematics and predictions for the budget-friendly LCD iPhone are much less contentious.

The 6.1-inch LCD iPhone’s dimensions are reportedly 5.79 x 2.81 inches, a bit longer and wider than the current iPhone X flagship, as Kelly points out. 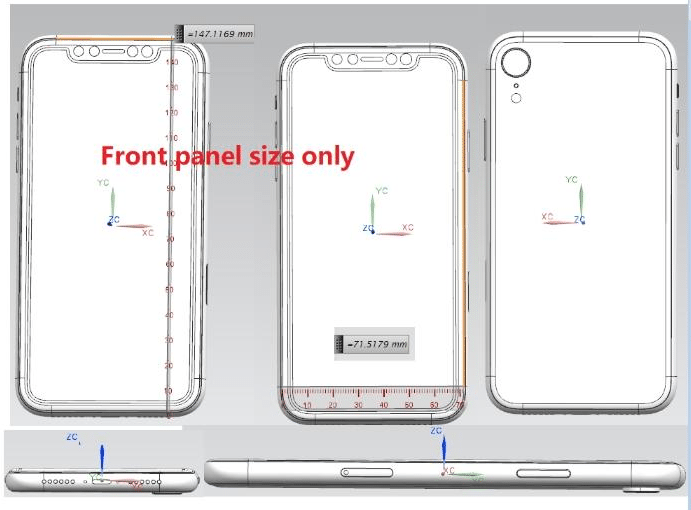 The schematics also line up with previous predictions about the device. They depict a single-lens camera setup (with, it’s worth noting, a pictured flash). But it’s less the design of the device that’s expected to shake things up, and more so its price point. Previous analyst forecasts have suggested that the budget LCD iPhone could retail as low as $550.

Because of that, it’s expected to retain an LCD display, and it might forego 3D Touch. But other than the low-reducing design compromises, the 6.1-inch iPhone should retain some iPhone X features, like Face ID and wireless charging.

Read Next: iOS 12 Hints an iPad Pro with iPhone X Tech Is Coming This Year
Sponsored