While it was previously rumored to feature “more SSD storage” than recent iPhone models, Apple’s upcoming iPhone 8 flagship was recently pegged to ship in a total of three storage capacities: 64 GB on the low-end, 256 GB in the mid-tier, and a whopping 512 GB as a top-tier offering.

The revelation comes to us courtesy of @GeekBar via Chinese social networking site, Weibo, who included in his post the image of an alleged iPhone 8 NAND flash 64 GB memory chip module manufactured by SanDisk. 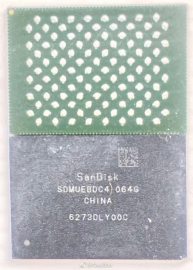 The source went on to claim that all three iPhone 8 variants will feature the same 3 GB of RAM onboard — a figure corroborated in a previous research note by the reliable KGI Securities analyst Ming-Chi Kuo. While Kuo noted that the iPhone 8 will retain the same 3 GB of RAM found in the iPhone 7 Plus, he reiterated that the DRAM transfer speed of both the iPhone 7s, 7s Plus, and iPhone 8 will outperform the iPhone 7 “between 10% and 15%,” mainly to help optimize the variety of augmented reality and 3D applications made possible with ARKit.

Up until now, we hadn’t heard much about the fate of SSD storage on Apple’s upcoming iPhone models; but only that the iPhone 8, which could also be called the iPhone Edition, will ship with 64 GB as a base-model offering. Earlier this year, analysts began chiming in with their claims that a 256 GB-equipped iPhone 8 could exceed as much as $1,100 or more. And now, with the prospect of a 512 GB iPhone 8 on the horizon, who knows how much the true top-tier iPhone will cost. Fortunately, we won’t have to wait long until we find out.