LG Display has for years been one of Apple’s primary liquid crystal display (LCD) suppliers, producing panels for devices like iPhone, iPad and more.

It’s even been rumored that because of its use of LCD technology, this mid-range 6.1-inch iPhone could cost as little as $550 – a move potentially opening the door to Apple selling a lot of them.

At this point, not much is known about the 6.1-inch iPhone except for it’s rumored iPhone X-inspired design, its omission of a Home button and inclusion of a TrueDepth camera and Face ID. However it’s possible, since the handset will feature the aging LCD technology in lieu of the more advanced OLED, that its LCD tech could be kicked up a notch to at least keep pace with current-generation trends.

Apple and LG made a similar advancement when P3 Wide-Color LCD tech was introduced on the iPhone 7 and 7 Plus. And that’s where LG Display’s upcoming evolution in LCD technology, dubbed MLCD+, might come into play.

Whereas traditional LCD panels are constructed around a pixel arrangement boasting red, green, and blue (RGB) sub-pixels in a standard three-to-one layout, LG Display has perfected and is on the cusp of releasing MLCD+ – a highly advanced LCD technology built around a four-to-one sub-pixel layout boasting red, green, blue, and white (RGBW) pixels in varying configurations.

“Traditional LCD panels are composed of millions of individual pixels. Each pixel is divided up into three subpixels: one red, one green, and one blue. Behind it all is a backlight, which shines through the pixels (and their subpixels) to produce the light emitted by the screen,” explains Gadget Hacks.

However with MLCD+, referred to also as ‘Super Bright Display’, “a fourth sub-pixel is introduced: white.”

“It also uses three sub-pixels per pixel, but unlike RGB, it can come in four possible variations: RGB, WRB, BWR, and GBW. In other words, it’s a PenTile arrangement — quite similar to what’s used in many AMOLED displays.”

What Are The Benefits of MLCD+?

Most notably, Patently Apple explains, by coupling in a dedicated white pixel “MLCD+ can turn the backlight panel down and still produce more visible white light than a traditional RGB LCD panel,” which not only saves battery power, but also allows users to crank up the backlight, thereby bolstering the display’s peak brightness to new levels.

The colorful infographic below from Gadget Hacks illustrates how MLCD+ operates on multiple fronts. 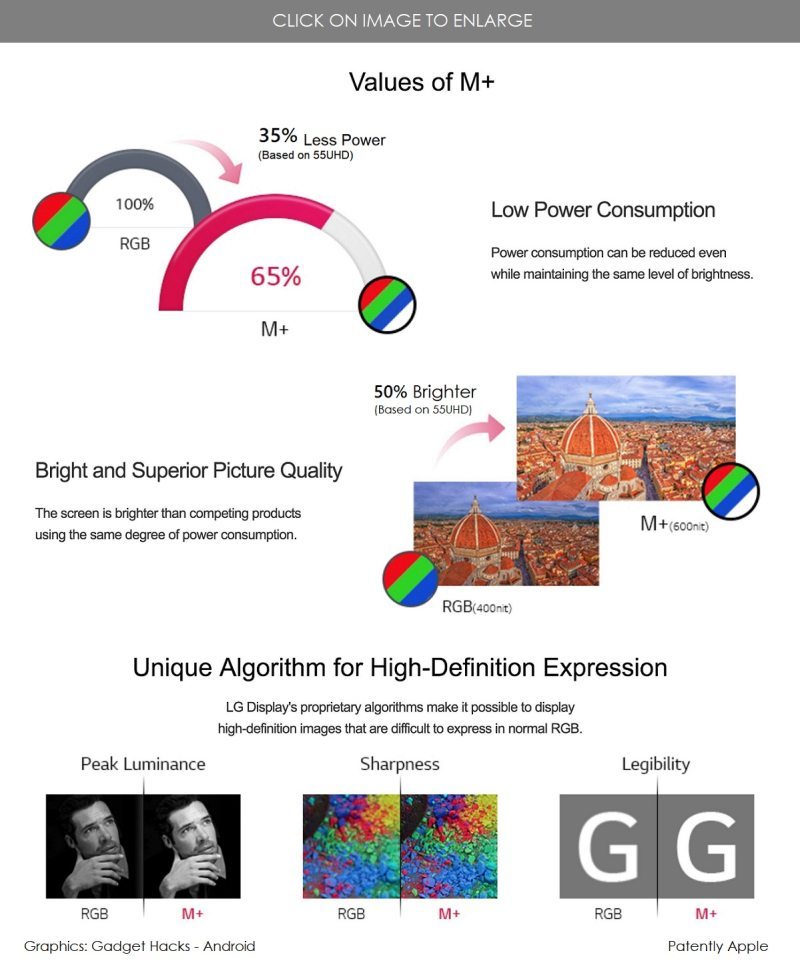 In addition to lower power consumption, increased brightness and overall picture quality, as well as improved “high-definition algorithms” resulting in increased sharpness, contrast and legibility, LG’s new technology will reportedly be able to render video playback in up to 4K resolution.

Which Devices Are First in Line to Feature MLCD+?

Over the summer, in June or July of 2018, LG is slated to release its unmistakably iPhone X-inspired G7 ThinQ smartphone, which will be the first handset to feature the company’s proprietary MLCD+ display tech.

According to findings made public by DisplayMate, while Apple’s OLED-equipped iPhone X boasts “an impressively bright” peak brightness of 726 nits, the MCLD+ technology destined for LG’s G7 ThinQ “boasts up to 1,000 nits of retina-searing output,” rendering it among, if not the, brightest smartphone displays ever produced, Patently Apple noted.

Given what we know about Apple’s 6.1-inch iPhone, while also taking into consideration that LG has been investing billions of dollars in a bid to remain Apple’s primary supplier of both LCD and OLED displays, it’s quite possible that the upcoming LCD iPhone will boast MLCD+. Though nothing is guaranteed, of course, until further notice.

While the benefits of MLCD+ are well documented and clearly represent “the next evolution” in LCD technology, it’s unclear if LG will even be ready in time to produce as many 6.1-inch panels as Apple may require for this year’s iPhone. Still, Apple being the forward-thinking company it is leaves plenty of room to speculate about what’s on the horizon.

Read Next: Apple Likely to Launch (At Least) One Triple-Lens iPhone in 2019
Sponsored