Apple has been granted a pair of patents last week that hint at a potential future augmented or virtual reality system.

The second, and arguably more interesting, of the two patents, 9,560,273, describes an augmented reality device with enhanced computer vision, specifically a “wearable information system having at least one camera” — per the patent’s title. The patent ideally suggests a head-mounted device, worn in front of the eyes, with a camera and display. A separate processing system would be integrated into this unit, or in a wirelessly connected device such as a smartphone.

Together, these patents could lay the groundwork for a future AR or VR device — namely one that can “provide information to the user about objects in the user’s surroundings in a power efficient way.”

The power efficiency aspect is an important one for patent 9,560,273. According to the text, existing image processing algorithms consume too much power to be practical for devices — something that’s, thus far, kept such devices from being implemented on a mass scale. To counter this, the patent suggests that a device would run primarily on a low-power scanning mode. When the system detects an object, it would crank into high-power mode to match, download, and display relevant information about an object or environment.

Patent 9,560,273 uses an example of a “virtual museum guide.” In low-power mode, a user could walk around a museum without worrying about the device’s battery. When an interesting object is detected, the AR device could use more power to display information, or play audio that explains the object. Of course, that’s just one specific example; however the possibilities for such a device really are boundless. 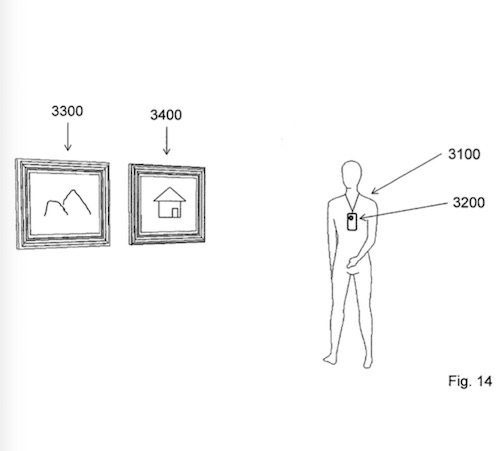 An interesting note is that both patents cite Metaio as the original applicant, an augmented reality company that Apple acquired in May 2015. As always, it’s important to take Apple patents with a grain of salt — there’s no way to tell if the technology described in them will ever see the light of day. That being said, Apple’s exploration of virtual reality technology is pretty well-documented — from a string of acquisitions and hires of companies and talent over the last few years, to a new rumor that Apple is partnering with German company Carl Zeiss to create a pair of augmented reality glasses within the next few years.