On Tuesday morning, the U.S. Patent and Trademark Office (USPTO) officially published a total of 56 new Apple patents, the most noteworthy of which explain the concepts of curved, edge-to-edge glass being implemented in order to maximize the display area of an electronic device, as well as another explaining a biometric fingerprint reading solution (Touch ID) which could be embedded underneath said display glass.

First up is Apple’s recently granted patent No. 9,652,096, which is titled ‘Reducing the border area of a device’, and seeks to explain the concept by which a device’s touch-responsive display glass can be bent at the edges so as to effectively “warp-around” the side of it.

Particularly, the patent explains concepts and methods by which a device’s front-facing display glass could be fabricated so as to “maximize the display/interactive touch areas of the device.” In one embodiment, the display could be fabricated in conjunction with a “flexible substrate” — a flexible, touch-sensitive panel (aka, the “circuit panel”), so as to render the panel capable of being bent slightly at the edges.

“Bending the edges can reduce the width (or length) of the panel, which in turn can allow the overall device to be narrower without reducing the display/touch-active area of the device,” the USPTO filing reads, in part.

Figure 8 (#800), for instance, shows how a display panel could be fabricated utilizing two of these so-called flexible substrates (#802, #804) so that the glass could be molded to wrap around a portion or the entire edge to touch the back of the device, achieving the advantage of allowing the touch active area of the panel to be extended closer to the edge of the device or reducing its overall width. 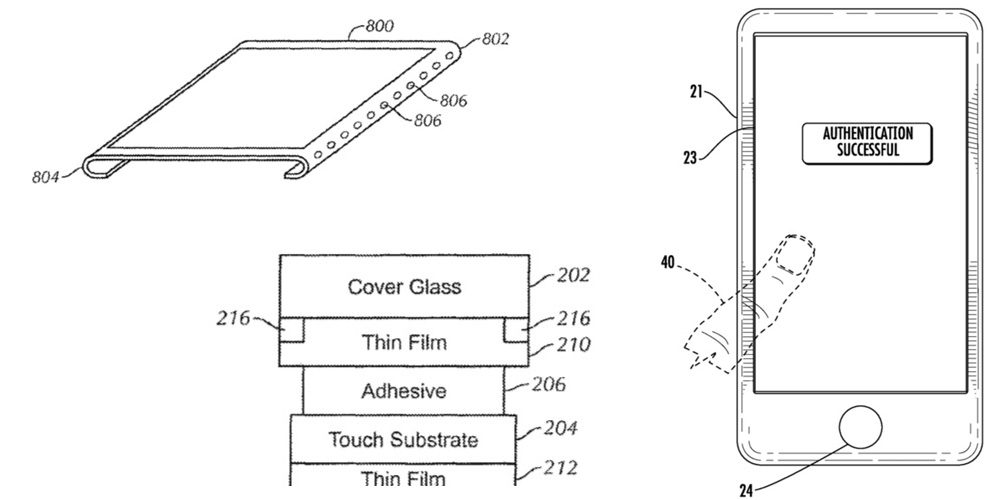 Next up is Apple patent No. 9,652,066, which covers Cupertino’s invention of a display within which a “finger biometric sensor” may be embedded. The patent, itself, describes a variety of ways in which Apple’s oft-rumored embedded Touch ID solution could be executed, describing the myriad of benefits of a user being able to authenticate their device without having to remove their finger from the display.

The patent essentially echoes the underlying ideas of a previously published Apple Touch ID patent, explaining the many benefits of allowing a user to authenticate their device using a finger while dichotomously performing other tasks, for example, by integrating the fingerprint sensor technology under the display glass itself.

Implications of These Patents

These patents appear to outline two hallmark features that have previously been rumored to debut on Apple’s iPhone 8 flagship, which will be unveiled later on this year. However, while recent reports conflict with the likelihood of embedded Touch ID debuting on the iPhone 8, which could also be called the iPhone Edition, these patents could hold implications for future-generations of Apple devices, including but not limited to the iPhone and iPad.