Outside of Charleston, West Virginia police are actively searching for a suspect that shot a man who was ultimately saved by his iPhone.

Anthony Kaufman planned to sell a $1,200 custom computer in the parking lot of Lakewood Elementary School in St. Albans at 10:40 p.m. on Wednesday. Beforehand, he happened to put his iPhone in the front-right pocket of his jeans. An action that might have saved his life.

The buyer, who remains unknown at this time, “was interested in it for like two weeks, and he just said he didn’t have the money; he was going to get paid soon,” Kaufman said. “It looked like he just wanted to buy it,” according to Charleston Gazette-Mail.

Kaufman invited the potential buyer into his vehicle on the passenger side. Kaufman claims after entering the vehicle, the man immediately pulled out an olive colored handgun.

“Kaufman said he hit the man before they both grabbed the gun. A burst of light filled the car, followed by shattering glass and wisping smoke. A bullet had pierced both ends of his center console before it ripped through his iPhone, leaving only a small tear in his jeans.”

The shooter exited the vehicle when Kaufman hit the gas. Reportedly a woman pulled her car in front of his, then a second man approached Kaufman with another handgun. He put the gun to Kaufman’s head and ordered him to shut his eyes. Shortly after that, all three of the aggressors were gone.

No warrants have been issued and no arrests have been made. Kaufman was not injured; however it appears his iPhone 7 Plus did not survive the incident. 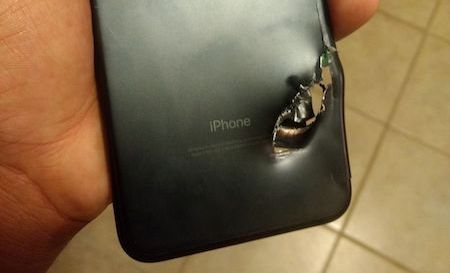