Apple’s latest and greatest iPhones — the beastly A11 Bionic-powered iPhone 8, 8 Plus and iPhone X — are without question Apple’s most powerful iPhone models to date.

Some real-world performance statistics have differed, some showing that Apple’s A11 Bionic is actually less capable than CPU offerings like Qualcomm’s Snapdragon and Samsung’s Exynos..

However, it’s worth pointing out that according to GeekBench, the six-core A11 CPU (clocked at 2.4 GHz) is still a powerhouse to be reckoned with, garnering single- and multi-core scores in the ballpark of 4000-4250 and 9500-10100+, respectively.

The iPhone X as we know it is a truly capable device, but with Apple just a little over two-months out from unveiling its second-generation iPhone X and iPhone X Plus, all eyes are now focused on what we might expect of them from a performance standpoint..

Thanks to our good friends over at BGR, it looks like the very first GeekBench scores for Apple’s upcoming A12-powered iPhone X (or iPhone X Plus) reveal that it’s poised to be yet another record-smashing performer.

According to the latest GeekBench 4 results, what we’re looking at is an unannounced iPhone model running iOS 12 boasting a six-core processor and whopping 4 GB of RAM (a first for Apple’s iPhone lineup). the A12 chip shows significant performance gains even over the current, A11-powered iPhone X running iOS 12. 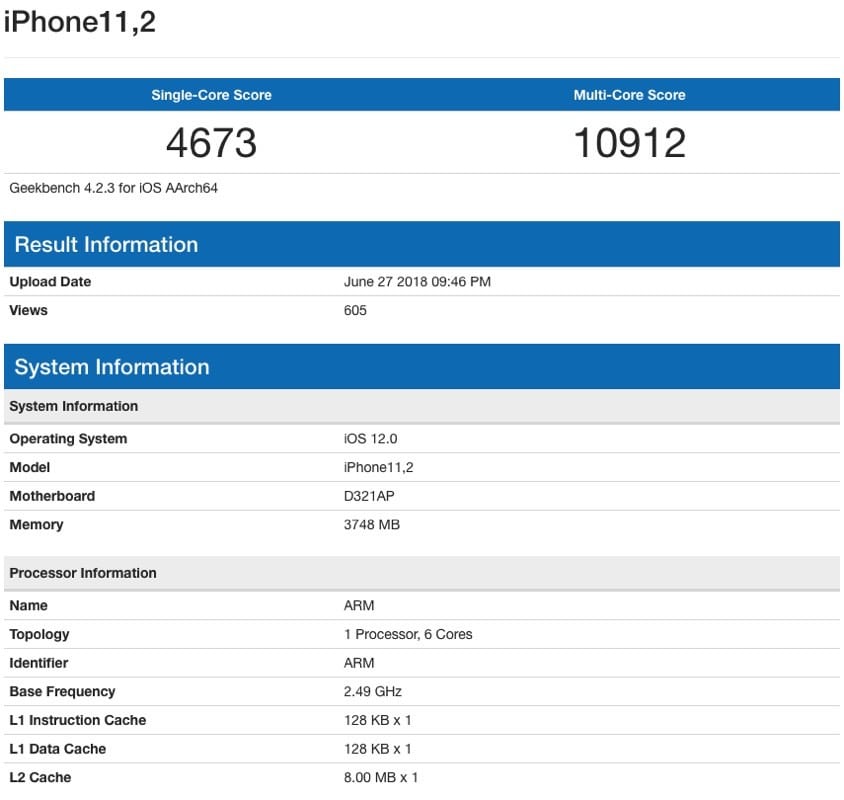 Numerically speaking, the new device garnered 4673 in Single-core, and 10912 in Multi-core performance scores on the firm’s index, representing gains of roughly 10 and 7 percent, respectively.

While that might not sound too promising, we should definitely reiterate that according to a trusted industry source, both of Apple’s upcoming 5.8- and 6.5-inch iPhone X models will couple the tech-giant’s powerful A12 CPU with a massive 4 GB of RAM, meaning they’ll be the most well-equipped of any iPhone models ever released.

Apple is also rumored to be readying a mid-range iPhone X-styled handset boasting a 6.1-inch MLCD+ display, a TrueDepth camera for Face ID and Animoji and more — though given its speculated $550~ price point, the handset is expected to ship with just 2 GB of RAM to keep production costs down.

Still, if you’re among the many consumers who opted to forego buying into Apple’s current thousand-dollar iPhone X flagship, you’ll be relieved to know the not only will this year’s models be even more powerful, but may even cost a hundred-dollars less, if current analyst predictions prevail.

If you’re not in the market to upgrade your smartphone this year, keep in mind that all of Apple’s iOS 12 compatible iPhone and iPad models (spanning as far back as the iPhone 5s and iPad mini 2) stand to gain considerable performance boosts simply as the result of being upgraded to iOS 12 when it touches down this fall.

As Apple promised at WWDC 2018, and as we’ve seen in multiple tests so far, iOS 12 is all about delivering speed, performance and stability enhancements rendering these older (and even more recent) iPhone and iPad modes faster, fluid, and more stable than ever before.