Enter for a Chance to Win: The Mirror Giveaway

Originally a wild notion spearheaded by Ming-Chi Kuo of KGI Securities, most of us now know that Apple’s high-end iPhone 8 flagship will boast an entirely new bezel-less design with a massive 5.8-inch OLED display panel stretching across its front surface from corner to corner. However, we may now have additional information about what this gorgeous, 5.8-inch display will be capable of.

Another dive into Apple’s recently leaked HomePod firmware has revealed additional information about how the upcoming iPhone 8 will function utilizing its all-new virtual Home button.

The revelation, which can be visualized in the infographic image below, was brought to light on Wednesday by the Twitter-friendly iOS developer, Steve Troughton-Smith, who was hoping to discuss the upcoming iOS 11 update and iPhone 8 — and specifically how Apple’s dramatically redesigned handset will manage its massive screen real estate in relation to the new virtual home button and smaller form-factor like that of the 4.7-inch iPhone model. 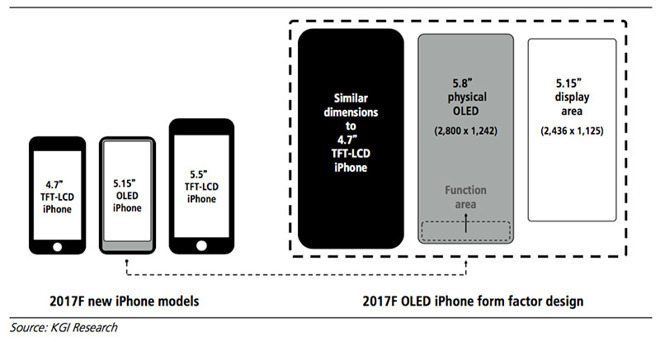 As you can see, the display will essentially be “broken up” into two key areas, including a 5.15-inch ‘Display Area’ measuring 2,436 x 1,125 pixels, as well as a ‘Function Area’ at the very bottom of the handset that will allegedly bring the iPhone 8’s overall display resolution to a stunning 2,800 x 1,242. Troughton-Smith suggested based on his discovery that the so-called function area can also be thought of as the “home button area,” and will supposedly act as a peripheral UI element that can either show or hide itself, or expand or minimize the virtual home button and other app-specific controls at the user’s discretion.

While vague on major details about what functionality the virtual home button will bring to iPhone 8, Troughton-Smith’s analysis of the code hints that Apple will use a “high-contrast” home button indicator, which will theoretically render it capable of working with a variety of different-colored themes and backgrounds. The overall function area, meanwhile, will provide users with an on-demand display of app-specific ‘buttons’, such as play/pause/volume control icons during full-screen video playback, or cut/copy/paste icons in Pages or Notes, for example, which will reveal or hide themselves as needed.

Troughton-Smith’s discovery echoes the sentiments laid out in a research note earlier this year from Ming-Chi Kuo, who was one of the first to suggest that Apple’s iPhone 8 will feature a massive 5.8-inch OLED display — and that the area would likely be broken down into display and function areas, as Troughton-Smith corroborates. The developer has shared a bounty of information about the upcoming iPhone 8 in recent weeks, including its design, key specifications, and revelation of new features, when it was discovered that Apple may have inadvertently leaked its own secrets about the device.

We still have a few weeks to go until the iPhone 8 is shown off on stage, of course, but at the rate these leaks are piling up, there might not be any big secrets left by the time it’s ready to hit store shelves.