Along with a plethora of information about its impending iPhone devices, the iOS 11 golden master (GM) leaks that occurred over the weekend have revealed details about everything from Apple’s powerful new 4K TV set-top box, to eleventh-hour iOS 11 features, and so much more. Digging even further through strings of iOS 11 code, 9to5mac uncovered what they claim and what appears to be the actual Apple Watch Series 3 device.

The ever-so-slightly modified wearable (pictured below) makes a brief appearance when users go to launch the iOS Watch app in iOS 11 GM, according to the site. Notably, the device shown features a form-factor that’s remarkably similar to the Apple Watch Series 1 and 2; however the appearance of elements like a modified Digital Crown, an LTE signal meter, and more, lend credence to the likelihood that what we’re looking at is in fact the Apple Watch we’ll see on stage tomorrow. 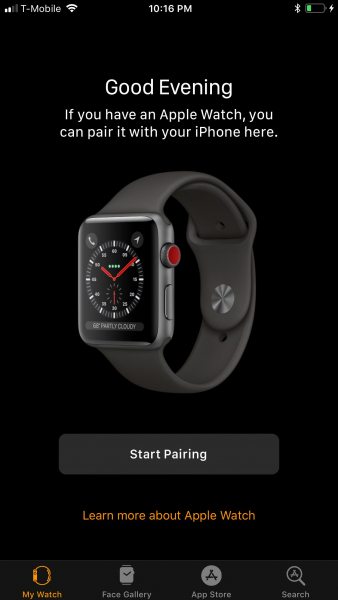 Aesthetically, the most distinguishable aspect of the device shown is its ‘Candy Apple’ red-colored Digital Crown, which may or may not be the place where Apple has tucked away the wearable’s LTE antenna, according to the site. Otherwise, the model showcased in the Watch app features a standard Space Gray chassis and Black Sport band.

It’s the presence of onscreen icons for navigation, telephony, and a pre-iOS 11-styled LTE signal meter, however, that most resoundingly suggest this is the 4G wireless-capable Apple Watch S3.

It was the well-connected KGI Securities analyst, Ming-Chi Kuo, who came out with a research note last month predicting that the Apple Watch S3 wouldn’t feature any substantial differences over its predecessors — aside from the inclusion of an LTE chip to facilitate 4G wireless connectivity, allowing users to sport the device untethered from their iPhones.

Interestingly, previous rumors and reports about the Apple Watch Series 3 have focused on a wide-range of aspects about the device, such as its long-rumored redesign into a ‘modular form-factor’, or its inclusion of FDA-approved health diagnostic tools. It appears, however, that at least on the surface, Apple has decided to ‘play it safe’ with the Watch Series 3, settling for a similar design, form-factor, and band arrangement as Watches past. It should still be interesting to see what if anything else the company has in store for its third-generation wearable, and you can find out all about it right here tomorrow.