An Apple patent application published Thursday by the U.S. Patent and Trademark Office hints at the company’s greater augmented reality ambitions — and it could serve as further evidence that a dedicated AR headset is in the works at Cupertino.

The patent details a method for displaying and representing information, such as points of interest and navigation markers, onto a mobile device’s display. Specifically, the patent suggests that such data could be an overlay on an image of a real-world environment displayed on a mobile device’s screen. The patent would start with an image or video of a real-world location, and will use geolocation data to determine a position and display information relevant to that location.

To be fair, that’s not entirely a revolutionary idea. In fact, we recently saw an app developer create a similar demo system using ARKit and other development toolsets baked into iOS 11. Even the Yelp app has a feature called the “Monocle” that, though somewhat rudimentary, displays nearby businesses and restaurants using augmented reality.

But the images included with the patent is where things get interesting. Although many of the figures represent such data being displayed on a smartphone, some of them show off what appears to be a standalone AR headset. There are few details about such a device within the patent, but it’s dubbed a “video-see-through head-mounted display” and appears to be similar in design to Google Glass (although it’s more likely just an example rather than a design sketch for an upcoming Apple device). 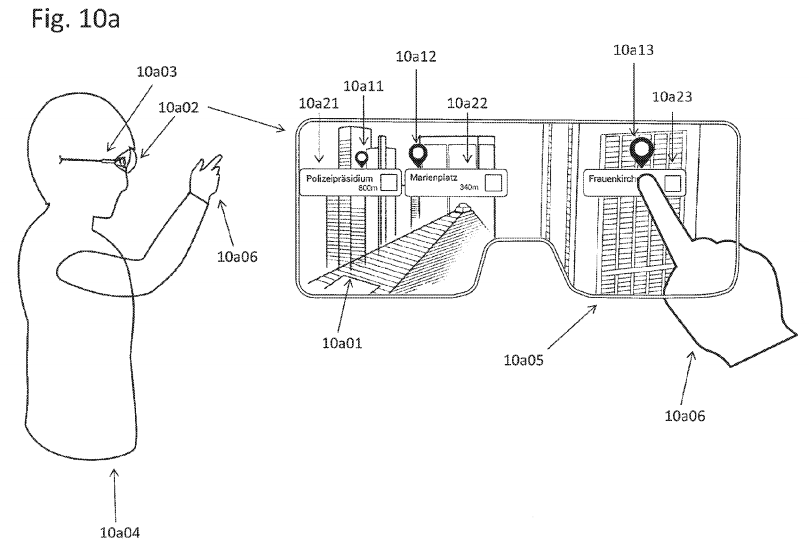 The so-called HMD device would have an on-board camera, which would be used to record a user’s environment. Additionally, the camera could track the movement and position of a user’s hands and fingers — allowing them to “interact” with their environment using augmented reality gestures. That means, potentially, you could noting use your hands to “tap” onto a virtual overlay to gain more information about an object or location.

Today’s patent application is all the more interesting when combined with the slew of rumors pointing toward a standalone Apple augmented or virtual reality device. Previous reports seem to indicate that such a headset is in the works, and may even be under co-development with German optics company Carl Zeiss. What’s more, last week, iDrop News seemingly got confirmation of such a device’s existence during a conversation with Apple support staff.

In recent years, Apple has acquired various AR-related companies and already holds quite a few patents related to the tech. And the company hasn’t been shy about its interest in augmented reality. Recently, Apple CEO Tim Cook said in an interview that augmented reality technology will “become really big.” Hence, Apple’s debut of its ARKit development toolset in June — which, overnight, will turn iOS into one of the largest AR platforms in the world.

Of course, it is just a patent application, so there’s no guarantee we’ll see any of the inventions described actually roll out in a consumer device. That being said, combined with Apple’s endeavors in the AR sphere, it seems like a revolutionary, Apple-designed augmented reality device might just be around the corner.

Easy-to-Use Professional Lighting for your Phone or Laptop! - Look Your Best!