Apple is currently using a small fleet of Lexus SUVs to test its self-driving tech on California roads. But while news of those vehicles first surfaced in June, Apple’s fleet appears to have gotten some substantial upgrades. One of these new self-driving cars has been spotted in the wild.

Photos of the vehicles, which are easily distinguished because of their large LIDAR apparatuses, were reportedly taken near an Apple office in Sunnyvale, California. The Apple Lexus SUVs were spotted by a MacRumors reader named Amy, who shared pictures with the website. According to the site, Amy regularly sees the vehicles around the Sunnyvale area — which has been previously reported as one of the primary locations for much of Apple’s autonomous vehicle research, testing and development.

The vehicle appears to have a much more elaborate self-driving system installed on its roof than previously seen vehicles, which includes a wider array of sensors and cameras, along with the usual GPS antenna, radio communications equipment and additional chassis-mounted sensors. A distance-tracking sensor also appears to be installed on the vehicle’s rear left wheel, along with a variety of components that appear to be Puck LIDAR sensors made by Velodyne. 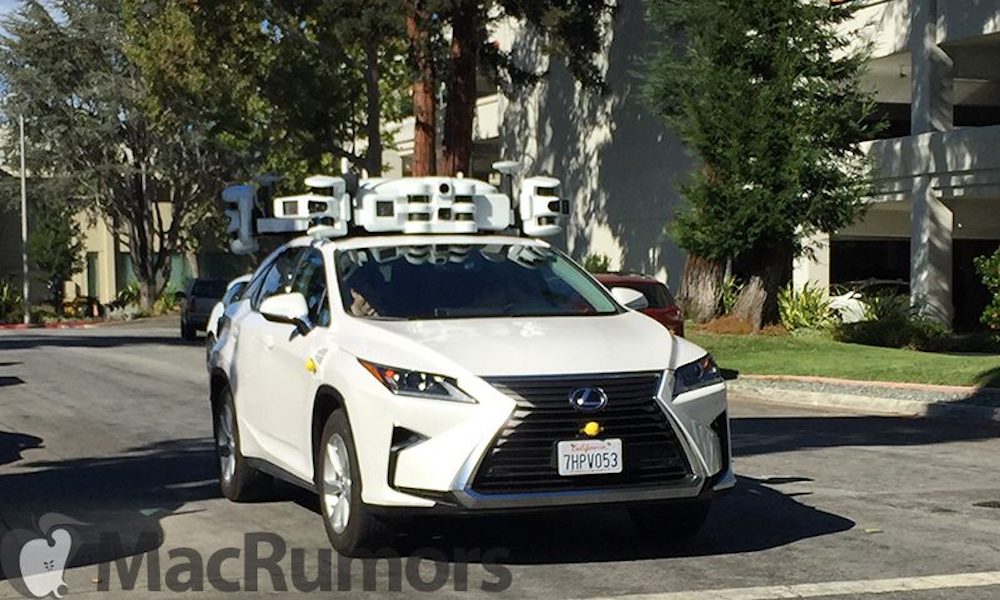 In April, Apple received a permit from the California Department of Motor Vehicles to begin testing its autonomous vehicle tech on public roads. Similarly, in June, Bloomberg reported that Cupertino had leased a fleet of Lexus RX450h SUVs from a Hertz-owned fleet management company. The vehicle spotted in the photos appears to be a newer model 450h, possibly a 2016 or 2017. Previously, Apple was using 2015 models, which could mean that the company is adding newer vehicles to its fleet.

The existence of Apple’s self-driving program, known as “Project Titan,” has been a poorly kept secret for years now. Originally, it was rumored that Apple was developing its own proprietary vehicle — an “Apple car,” so to speak. But after a relatively bumpy road, Apple switched gears to focus on creating a suite of underlying autonomous driving systems. Part of the sea change for Titan was longtime Apple executive Bob Mansfield taking the helm as project lead, whittling the project down to a much sharper focus.

Apple CEO Tim Cook basically confirmed the existence of Project Titan during a June interview with Bloomberg. “We’re focusing on autonomous system,” Cook told the publication. “It’s a core technology that we view as very important.” The project is rumored to have as many as 1,000 engineers and experts working on it.

In more recent news, the New York Times reported last week that Apple was using its self-driving car technology as an employee shuttle. That new project, dubbed PAIL (Palo Santo to Infinite Loop), will ferry Apple staff to and from the company’s various campuses and office locations.