Image via Gears of Biz / Giga.de

Apple’s custom-designed A-series chips are marvels in mobile processing, powering generation-after-generation of iPhone and iPad devices with their advanced, ultra-fast yet power-efficient architecture. Over the past year or so, specifically, Apple’s systems on a chip (SoCs) have absolutely obliterated their closest competition — even comparable offerings like Samsung’s Galaxy S8, S8+, or LG’s G6, which are powered by Qualcomm’s latest Snapdragon 835 SoC.

On paper, Qualcomm’s chip not only features a slightly higher clock-speed than Apple’s A10 Fusion, but it also boasts a secondary, quad-core CPU cluster, which is obviously supposed to make it super-powerful and essentially unbeatable, right? Unfortunately for Qualcomm, the game changed dramatically last week when Apple unveiled its new iPhone 8, 8 Plus and iPhone X flagships, which most notably run on the company’s next-generation A11 Bionic CPU.

We still have much to learn about the A11, but so far we know it will be Apple’s first six-core A-series SoC; it will also boast its own dedicated GPU, a neural processor for managing facial recognition, 3D/AR tasks, and it will be faster than the A10 before it, naturally. Just how fast is it, you ask?

Earlier this week, the folks at GeekBench published performance scores for the new iPhone trio. As you can see in the charts below, the new iPhone models considerably outperform the iPhone 7 and 7 Plus in both single- and multi-core tests. In the case of the former, iPhone 8, 8 Plus, and iPhone X generated GB4 scores of 4,197, 4,184, and 4,204, respectively, in comparison to the iPhone 7 and 7 Plus’ scores of 3,444 and 3,435. At face value, these numbers would indicate that the iPhone 8 is about 25% faster in single-core performance than its predecessor, as Apple said. 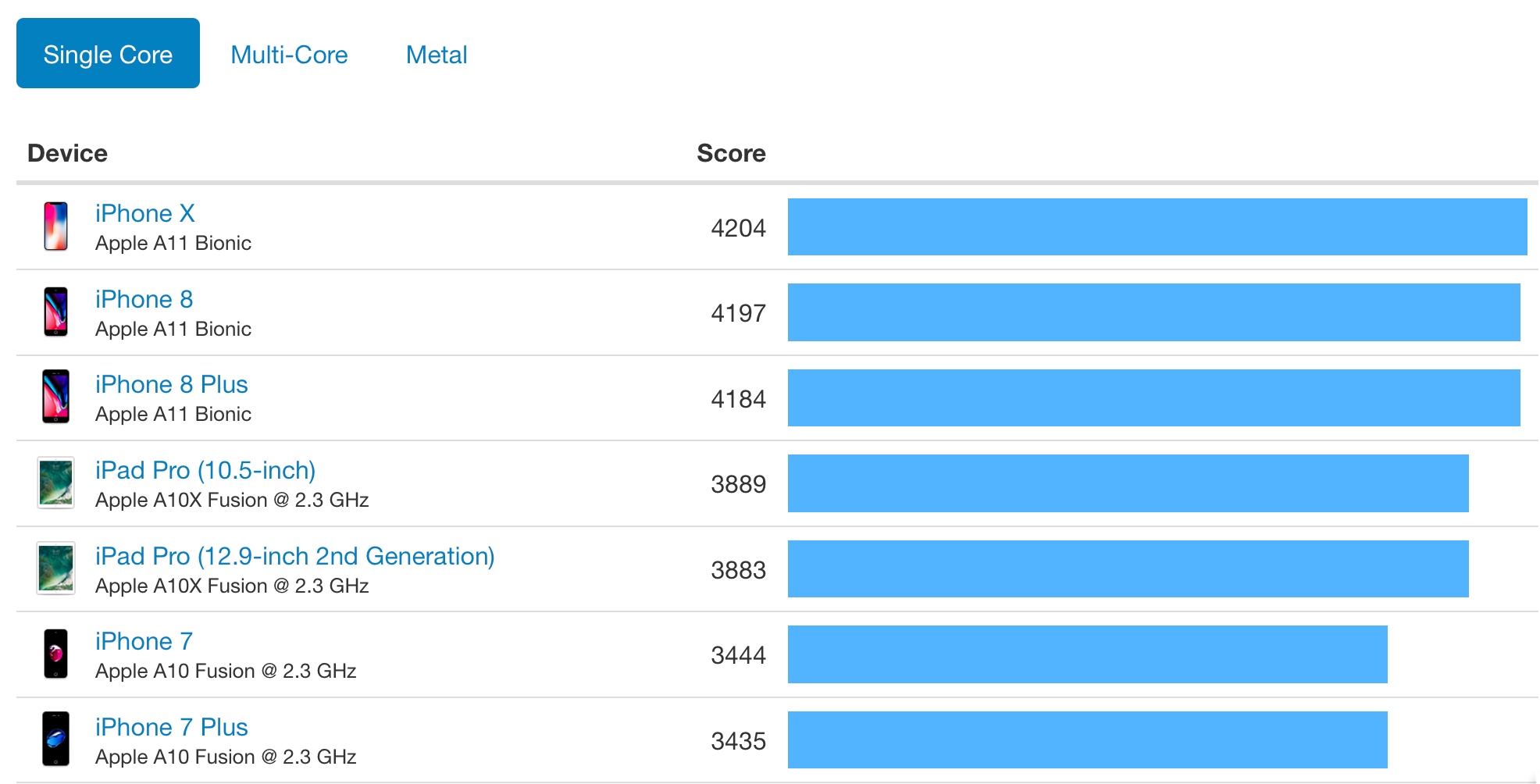 It’s in multi-core testing, however, where the iPhone 8 truly stole the spotlight, showing a massive 80% performance improvement over the iPhone 7 when the A11 Bionic’s six CPU cores are working together. 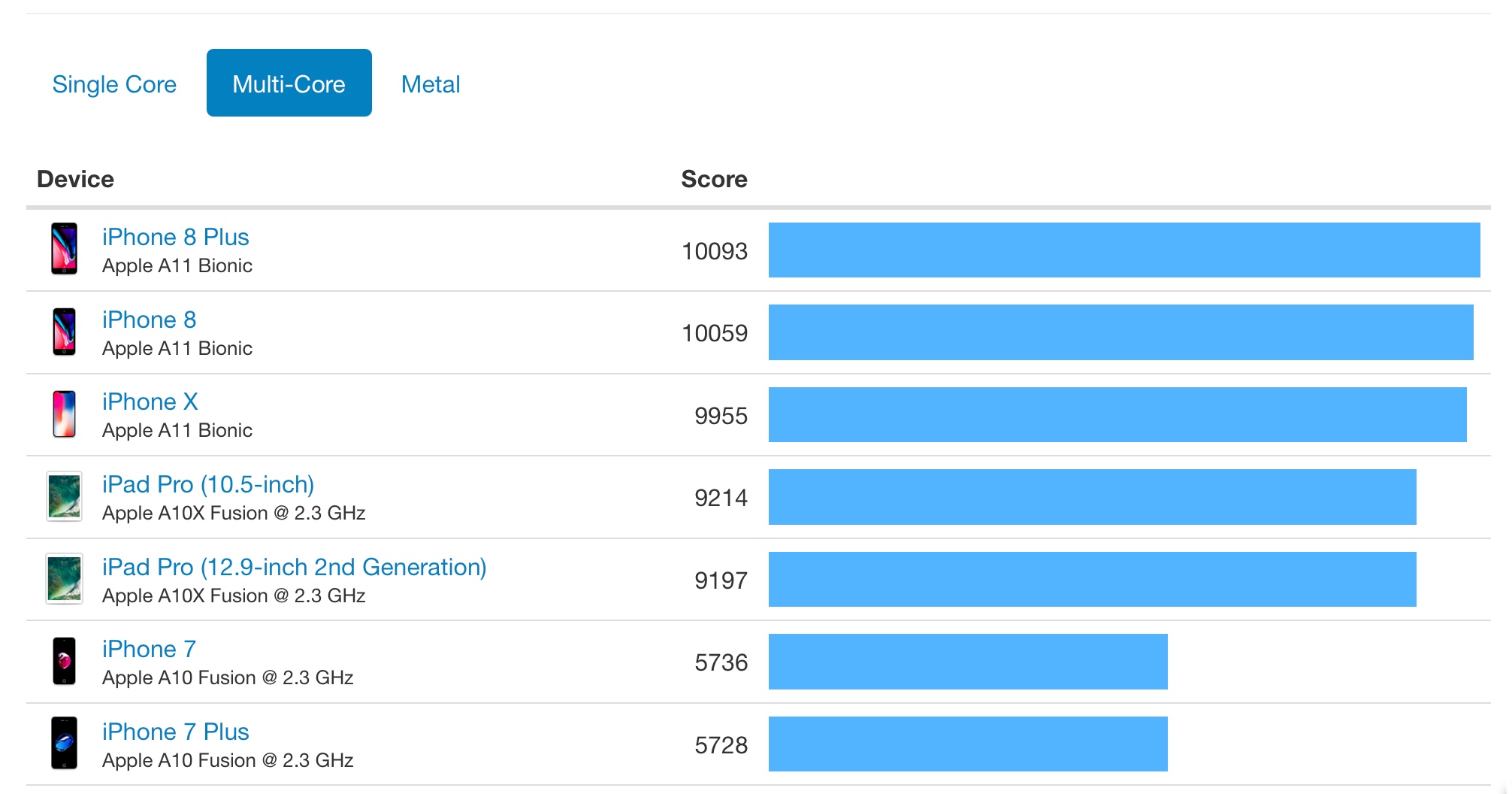 WARNING: Things are about to get real ugly for Android users. In comparison to the latest smartphone offerings from competitors like Samsung or LG, not only do Apple’s iPhone 8, 8 Plus, and iPhone X absolutely destroy them — but they do, so impressively so, we’d be hard-pressed to believe that Qualcomm will be able to catch up anytime soon.

Consider the Samsung Galaxy S8+, for example. The otherwise remarkable (and downright good-looking) flagship scored just 2,006 and 6,708 in single- and multi-core tests, respectively. On paper, that would essentially mean the iPhone 8 is a bit more than twice as fast as Samsung’s “beastly” Galaxy S8+ in single-core tests. With a whopping GB4 score of 10,059, the iPhone 8 also appears to be about 35% faster than the S8+ in multi-core tests.

Even sadder was the fate of other Snapdragon-equipped devices like the LG G6 and V20. The G6, according to GeekBench, clocked single- and multi-core scores of just 1,797 and 4,285; while the V20 clocked in even lower at 1,553 and 3,626, respectively. From a percentage standpoint, those scores would indicate the iPhone 8 is about 58% faster than the G6 in single-core performance, and 60% faster in multi-core performance.

One last thing we took a look at were AnTuTu scores for the latest iPhone and Android flagships. These values were released just hours before the iPhone 8 and 8 Plus went up for pre-order last Friday, and to put it bluntly — Samsung, LG, and all the other Android OEMs are in big trouble. According to AnTuTu, the iPhone 8 logged scores surpassing 200,000, and in some cases 201,000 — meaning that even the standard iPhone 8 model blows away the competition.

A couple of things to note about these scores. First, as a general rule of thumb in interpreting them: higher numbers mean better performance. Second is that as impressive and foretelling as they are, these benchmark scores shouldn’t be considered a lone factor in determining performance. While the majority of this year’s high-end Android phones run on the same Snapdragon 835, power will still vary from device to device depending on a number of factors like how much RAM and storage is onboard, how many display pixels require power, what kind of tasks are being performed and how much battery is remaining, etc.

Still, what we’re looking at here is a good sign of what iPhone 8, 8 Plus and iPhone X buyers have to look forward to.