After months of anticipation, Apple on Tuesday unveiled its 2017 stable of iPhones. The lineup includes an iPhone 8 and 8 Plus device that builds upon the familiar iPhone 7 form factor, as well as a premium iPhone X with a revolutionary design and additional next-generation features.

It’s a lot to take in for potential buyers, particularly as the devices share a number of similarities as well as differences. Here’s how Apple’s three new iPhones stack up and compare to each other.

Obviously, the biggest difference between the three 2017 iPhones is the display that each device sports — especially relative to its form factor and overall size. All three devices will feature Apple’s True Tone technology, however. 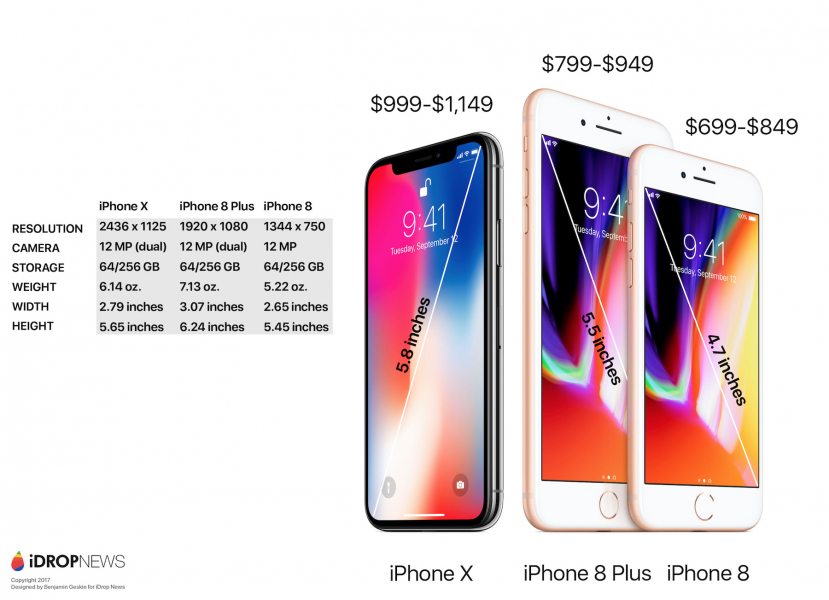 So yes, the iPhone X is “all-screen.” The fact that it manages to pack such a large display (larger than the iPhone 8 Plus) into a smaller form factor is impressive. But it’s not just that: the iPhone X is also the first Apple smartphone with an OLED display, marking a big upgrade over the usual LCD displays.

All three iPhones this year will run on Apple’s latest A11 Bionic CPU, which also comes with a slew of Apple-designed tech like a proprietary graphics processing unit (GPU) and image signal processor (ISP). Presumably, this means that all three devices will have similar performance across a variety of tasks.

The iPhone 8 and the iPhone 8 Plus will retain the iconic Home button. That means that the user experience will remain largely unchanged from the previous generation.

The iPhone X, on the other hand, does away with the Home button. Instead, it’ll rely entirely on gesture-based controls for opening the device, returning to the Home screen, and invoking the multitasking pane. It’ll also use its side button to enable Siri and as an Apple Pay shortcut.

The photo- and video-taking technology on the 2017 stable of iPhones have gotten their usual boost in power. They’ll all feature improved cameras, optical image stabilization (on both lenses for the dual-camera iPhones), and a quad LED True Tone flash with Slow Sync. They all are capable of shooting video in 4K at up to 60fps, or in 1080p at 240fps.

No real differences as far as connectivity. All three iPhones will come with the following connectivity specs.