Apple on Tuesday morning held its first iPhone/fall products launch event at the all-new Steve Jobs Theater. Among a bounty of new offerings including an LTE-equipped Apple Watch Series 3, as well as an updated 4K and HDR-capable Apple TV, Cupertino’s top-brass took the wraps off 2017’s highly-anticipated iPhone duo — the all-new iPhone 8 and iPhone 8 Plus.

Previously believed to be the iPhone 7s and 7s Plus, Apple has pulled a move similar to Samsung with its ill-fated Galaxy Note 7 opting to forego traditional numbering patterns and bump its new flagships up to the next level. And fittingly so, as the iPhone 8 and 8 Plus pack a whole lot of power, innovation and functionality into an elegantly crafted shell. 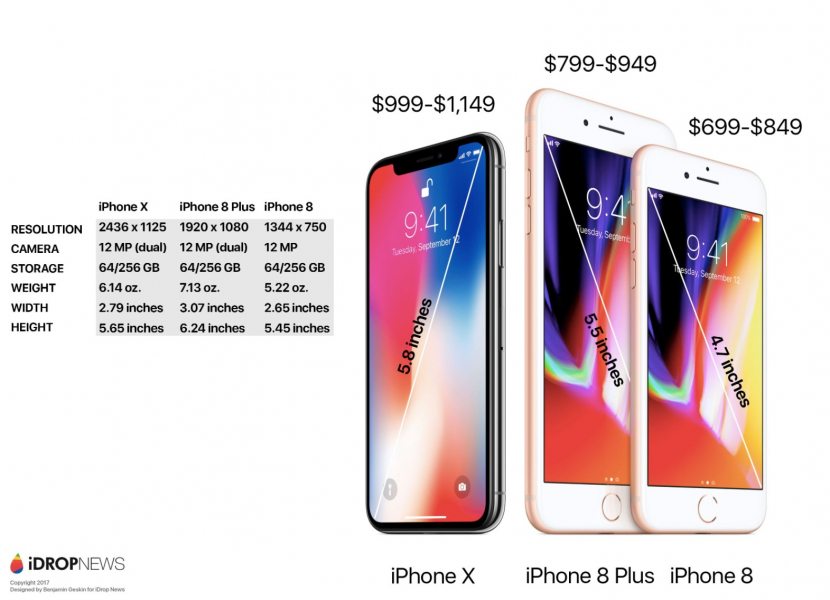 On the surface, Apple’s new flagships look aesthetically similar to their predecessors, and boast the same candy bar-style form-factor with 4.7- and 5.5-inch LED/LCD displays, respectively. Take a closer look, however, and you’ll notice that the iPhone 8 and 8 Plus have been encapsulated in what Apple is calling an “aerospace-grade aluminum” chassis, topped on both the front and back with seven-layer strengthened, steel-reinforced glass panels that will enable both models to charge wirelessly via Apple or third-party Qi-enabled pads.

According to Apple, the iPhone 8’s stereo speaker array is now 25% louder and capable of providing deeper bass, as well.

At the core of the new flagships is what Apple has dubbed the A11 ‘Bionic’ CPU, which features an industry-leading hexa-core (6-core) architecture, built on the A-series’ renowned 64-bit desktop class framework and featuring a total of 4.3 billion individual transistors. As we previously learned thanks to Geekbench 4, Apple is promising that the A11 Bionic delivers speeds up to 70% faster than the previous-generation A10 Fusion SoC.

Both models feature improved camera hardware, including new 12 MP sensors that Apple says produce up to 85% less noise, across the board. The iPhone 8 Plus, exclusively, features two new 12 MP sensors with a suite of advanced new capabilities. One of these advancements is a new feature called Portrait Lighting, which will launch in beta alongside the iPhone 8 Plus, and allow users to create professional-grade lighting effects in their photos using “depth and advanced machine learning to capture the perfect lighting balance.” The new cameras also feature video recording advancements such as shooting 4K HD at 60 fps and 1080p HD at an ultra slow-motion 240 fps.

Both the iPhone 8 and 8 Plus will feature wireless connectivity options including Bluetooth 5.0, LTE Advanced, and the latest Wi-Fi.

They’ll be available in three, stunning color options including Silver, Space Gray, and a quote unquote “beautiful new gold finish,” which unfortunately means that Jet Black and Jet White are officially off the table this year.