The latest data provided by market research firm, Counterpoint, reflects that during the month of October, 2017, Apple’s iPhone 8 and iPhone 8 Plus were the No. 1 and No. 2 best selling smartphone devices, respectively.

According to the firm’s Market Pulse: November Edition, which seeks to provide key insight into current trends in the mobile handset market, Apple’s iPhone 8 flagships are performing much better than we’ve been lead to believe.

This is especially true in comparison to other offerings from Samsung, Oppo, Vivo, and Xiaomi, which also made the list.

As you can see from Counterpoint’s analysis of smartphone sales, iPhone 8 and 8 Plus enjoyed the greatest popularity in October, and especially in relation to Samsung’s latest Galaxy Note 8 and Galaxy S8+ flagships. 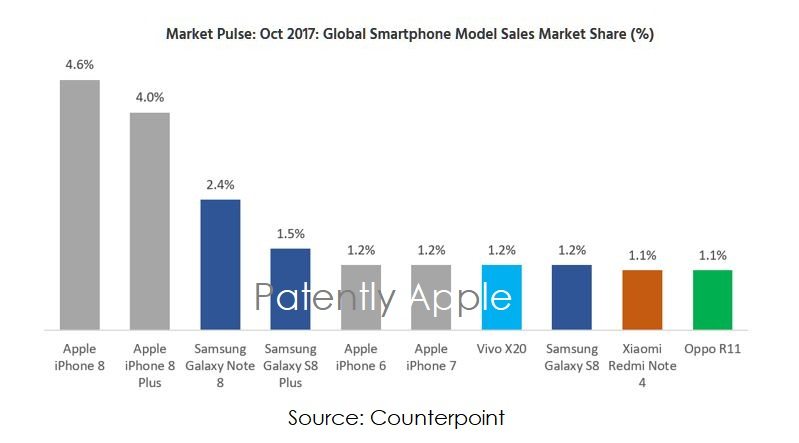 Other contenders include Apple’s older iPhone 6 and iPhone 7, interestingly, which at 1.2 percent apiece were about as popular as Samsung’s aging Galaxy S8+.

“The performance of the Samsung Note 8 was good and the Galaxy S8 series was also decent sequentially,” said Counterpoint analyst, Pavel Naiya, who noted that the South Korean company’s success can be attributed in part to “strategic price moves.”

On the whole, customers veered towards purchasing high-end smartphones in October (those belonging to the ‘Premium’ category of $400+ devices), which has largely been dominated by Apple’s iPhone over the years.

Also worth noting, of course, is that the inherent data does not factor in iPhone X sales, which we can already tell are going to have a huge impact on these figures as they continue pouring in.

The present analysis, while providing insight into U.S. smartphone sales, also highlights the increasing demand for high-end devices in burgeoning markets like India.

Did you pick up a new smartphone this fall? Let us know which kind in the comments!