Among the collective of global desktop, notebook and tablet PCs, Apple’s Mac and iPad devices have once again earned the highest customer satisfaction rating, according to the latest data collected and collaborated by the American Consumer Satisfaction Index (ACSI).

As mentioned in its annual Household Appliance and Electronics report for 2018, Apple earned an overall score of 83 in ACSI’s latest analysis.

Notably, that’s the same score Apple earned from the firm last year, and is still sufficient enough to propel the Mac-maker to the front of the pack — albeit just slightly ahead of its fiercest competitors.

Each year, in compiling its data and determining scores, ACSI relies on interview responses obtained from approximately 250,000 customers, using the data to analyze their satisfaction with more than 380 companies across 46 industries, the firm states on its website.

As it pertains to Apple’s latest iPad and Mac models, across “nearly every aspect of the customer experience,” ACSI determined Cupertino’s devices were “best-in-class” in terms of design, features, available apps and more.

And while we can’t say ACSI is wrong in its latest assessment, it’s definitely worth pointing out that although the latest data covers 2018 products — it actually covers the majority of Apple’s 2017 product lineup, including the mid-2017 iMac, iPad Pros and MacBook — as well as some early-2018 devices like the budget-friendly iPad for Education.

Apple was widely expected to refresh the Mac and iPad lineups at its Gather Round special event earlier this month — however, as of this write-up, we’re still waiting for official word on what the company has planned. Previous reports had claimed everything from refreshed iPad Pro models boasting iPhone X-inspired designs, to updated 2018 MacBooks, and even a new Mac Mini, were lined up for the 2018 holiday season — but that’s looking rather unlikely at this point..

Apple on the Edge?

While Apple’s latest Mac and iPad devices earned ACSI’s highest satisfaction score for the second year running, it’s also worth pointing out that Apple’s closest competition in the consumer PC tablet space is not far behind. 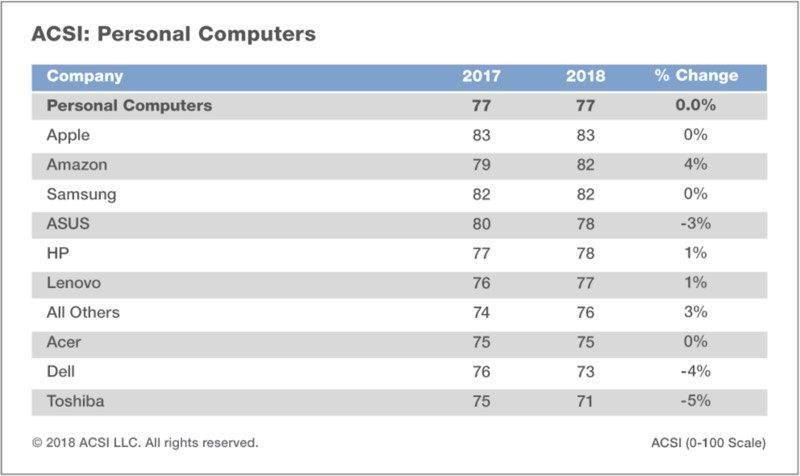 Amazon is nipping right on Apple’s tail this year with an ACSI score of 82, as customers continue indicating high satisfaction with the design, ease of operation, and sound/graphics quality of the e-commerce giant’s Fire tablets.

Meanwhile, tied to the point with Amazon, is Samsung, whose PC and tablet products earned the same 82 points in overall customer satisfaction. 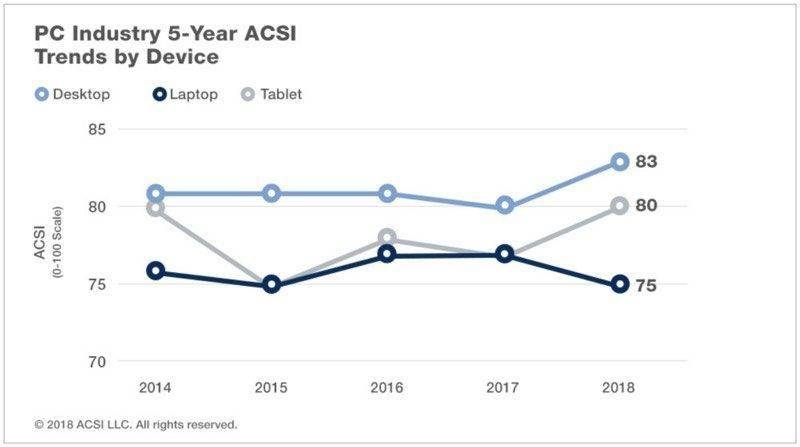 While just 17 percent of respondents indicated purchasing a new desktop computer within the last year, data showed customer satisfaction with them growing at a rate of 4 percent — both for desktop and tablet PCs. Laptop satisfaction, meanwhile, declined a few percentage points from last year.