With Apple’s release of iOS 10.3 earlier this week, all the exciting new features and enhancements that it brings to the table are continuing to sprout up on the web every day. The latest, and perhaps most noteworthy of what we know so far, however, comes to us courtesy of Cupertino’s all-new Apple File Management System (APFS) which was ushered in as part of the update.

While we’ll touch upon some of the intricate details of APFS towards the end of this article, we want to first point out how it appears that the new file management system for iOS devices has been able to free up a considerable amount of available storage space for some users thus far. In particular, as AppleInsider recently reported, they were able to free up approximately 7.81 GB of storage on their 256 GB iPhone 7 Plus handset, as documented in the comparison images below. Not only that, but the site also reported that it was somehow able to increase the overall storage allotment, altogether, which climbed from 248.5 to 252.14 GB when upgraded from iOS 10.2.1 to the latest version 10.3. 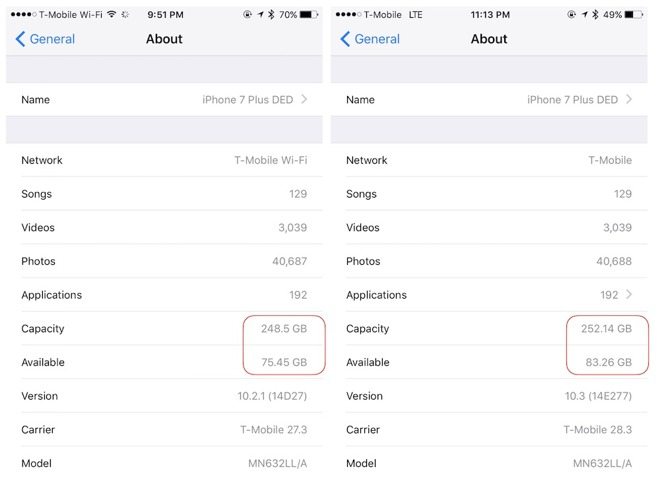 This apparent storage bump may seem strange — if not downright questionable — to the average user, especially considering that new versions of iOS typically demand more available storage than their predecessors. However, it’s important to note that while it appears one can free up a fairly substantial amount of space of their device by upgrading to iOS 10.3, the greater amount of available capacity to you will ultimately result in a proportionally larger storage bump.

Either way, one thing is clear: it’s resoundingly apparent that APFS, and the way it manages our iOS files, provides our devices a much more efficient means of managing storage, on the whole. APFS actually replaces Apple’s former file management system — known as Hierarchical File System+ (HFS+) — from as far back as 1998. Given the seemingly antiquated nature of HFS+, however, Apple sought to revolutionize how iOS devices store and manage files, by ushering these methods into the modern era of 64-bit CPUs and Solid Stage Drives.

Interestingly, as opposed to the standard, magnetic-based spinning hard drives (HDDs) of Macintosh and PC computers past, Apple’s APFS system is designed with optimizations for the future of solid state storage in mind, and could even pave the way for 64-bit CPU-equipped iOS devices that feature an even greater amount of storage than 256 GB.

APFS also changes how much volume data is written at the lower levels of the onboard partition. In other words, the apparent capacity increase appears to be the direct result of the new file writing system and how it utilizes less space on the SSD.

Additionally, APFS includes support for other “lower-level” storage-saving features. An example would be the system’s ability to create what’s known as “clones” — allowing APFS to create a duplicate, space-saving pseudo-copy of any particular file, by “referencing the same storage structure as representing multiple files in different locations” according to AppleInsider.

While there are many complex explanations of how exactly APFS works to maximize storage, users of lower-capacity iPhones and iPads will be thrilled to know that iOS 10.3 can give their storage a much needed bump amidst our increasingly digital, data-demanding ways of life.

Have you noticed an improvement in your available storage since upgrading to iOS 10.3?
Let us know in the comments!