Earlier this week, Intel took the wraps off its next-generation range of X-series processors, which the chip-maker touted as being the “ultimate platform” for creatives and content creators. While flaunting the ranges’ impressive 20% performance gains over the previous-generation in terms of handling CPU- and RAM-intensive tasks, Intel went on to provide an infographic outline of the X-series’ key specifications, noting that the family will consist of nine offerings ranging from the quad-core i5-7640X (clocked at 4.0GHz w/ TurboBoost up to 4.2GHz) up to the top-tier 18-core i9-7980XE (clocked at 2.6GHz w/ TurboBoost up to 4.2GHz.).

“The new X-series processor family is the ultimate platform for content creators and gamers, and users can expect up to 20 percent better performance for VR content creation, and up to 30 percent faster 4K video editing over the previous generation,” Intel said in its official press release. “This means less time waiting and more time designing new worlds and experiences. Gamers and enthusiasts will experience up to 30 percent faster extreme mega-tasking for gaming over the previous generation.” 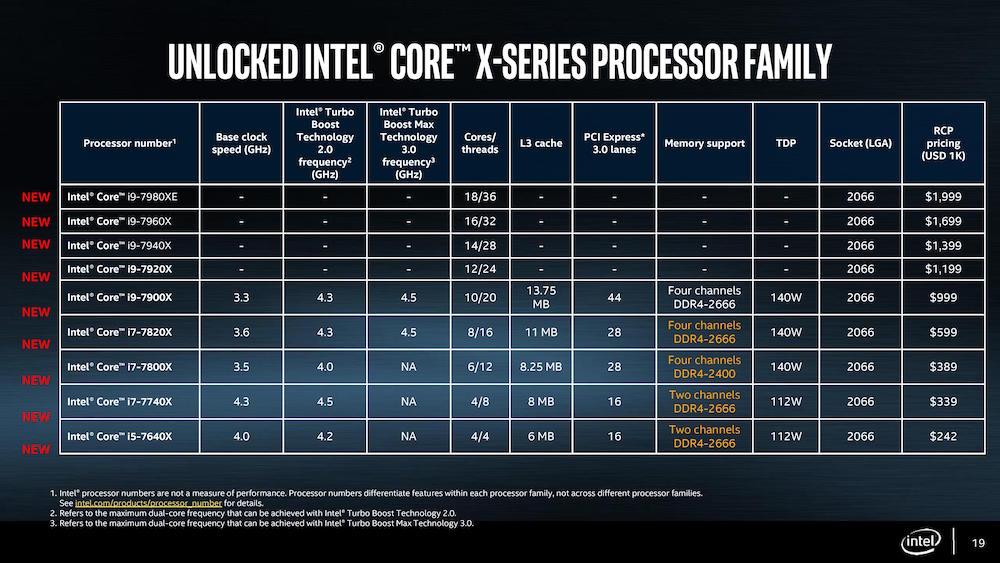 Intel’s line of X-series CPUs will be exclusive to desktop and workstation configurations, and though they may seem promising on paper, it’s worth pointing out that they likely won’t make their debut in any upcoming Apple computer models — especially in the high-end iMac Pro, which is due to hit store shelves this holiday season.

Apple showcased the insanely-powerful, $5,000 iMac Pro during the keynote of its Worldwide Developers Conference earlier this summer, and without delving into major detail about the system’s features or specifications, Cupertino assured the audience that the machine would ship with one of Intel’s fastest and most powerful, current-generation chipsets.

Interestingly, Intel’s X-series unveiling included the sobering news that its new processors will not be compatible with Apple’s implementation of ECC RAM on the iMac Pro, but will instead rely on DDR4-2666 RAM exclusively. ECC memory certainly has its advantages over DDR4, such as improved speed and overall stability, however Apple’s transition to the standard for its iMac Pro perhaps begs the question: which Intel chip will they use?

While not fully confirmed, it was hinted earlier this year that the iMac Pro will feature an Intel Xeon E-series processor — perhaps one of the Haswell-based E5 or E7 multi-core platforms, which embody the most current-generation of Intel’s advanced Xeon E-series chips, and a huge step up over the Mac Pro’s Intel Xeon E3 CPU.

Despite their absence in the upcoming iMac Pro, and though its reveal was scant on details about future employment, it’s highly likely that we can expect to see an Intel X-series CPU in one of Apple’s future MacBook or iMac models.