Earlier this week, Apple was granted a total of 55 new patents covering a broad range of new concepts and technologies, including one in particular covering what the company describes as an iDevice boasting a “foldable or bendable display.”

Patent No. 9,947,882, which was originally filed back in 2016 but published by the U.S. Patent and Trademark Office on Wednesday, specifically covers the company’s invention of a possible iDevice (iPhone or iPad) featuring a “fold-in or fold-out” style form-factor and display.

According to the literature in Apple’s patent application, the future iDevice could be built around a hinge that inherently allows the handset to be folded in half — kind of like a soft taco — along a “bend axis” around which the device’s OLED display may or may not physically overlap.

See Apple’s patent images FIG. 1, 3, and 4 below to get a better idea of this design. 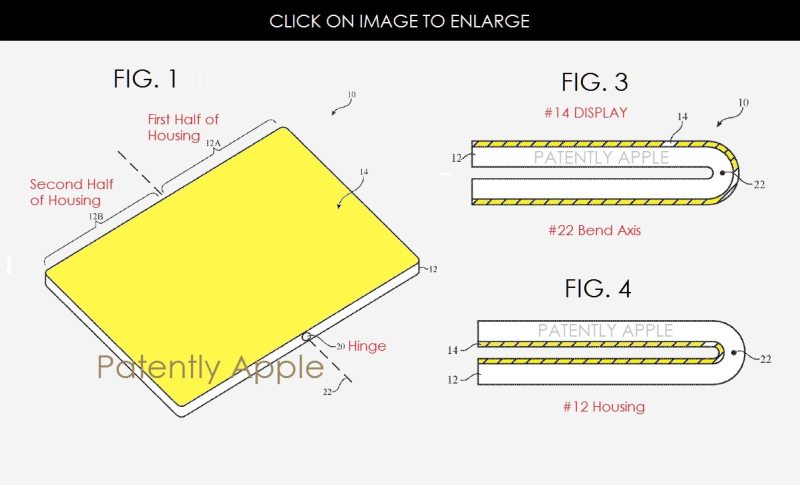 Yet Another Foldable Display Patent

If you’ve been following us for a while, you’ll know this is hardly the first foldable display patent Apple has been granted.

In fact, Apple has been awarded a plethora of similar foldable display patents in recent months and years covering a myriad of technologies meant to make the concept viable.

Click here and here to explore some of Apple’s previous flexible display patents.

Of course, given that these are all patents, it remains unclear whether Apple will ever produce a product like this for the mass market.

Given the sheer number of them we’ve seen so far, while also considering the tech-giant’s ongoing work to develop thinner and more versatile microLED display panels and flexible circuit boards, it’s only reasonable to assume we could see something along the lines one day.

Samsung is likewise rumored o be working on a foldable smartphone form-factor, according to some of its own patent filings — though it also remains unclear if and when the firm will ever release a foldable device.

Currently, the company is rumored to be working on a foldable smartphone dubbed the Galaxy X, featuring a foldable 7.3-inch AMOLED display, for a late 2018 debut.. But only time will tell if that comes to pass.