A little over three months has passed since Apple released its LTE capable Apple Watch Series 3. And while the company initially sought to swoon early adopters by partnering with America’s largest wireless providers to offer “three months of complimentary LTE service” with their purchase — a $30 value, based on the ubiquitous $10/month service fee — it turns out the actual cost of owning an LTE capable Apple Watch S3, in most cases, comes out to much more than that.

Now that the fee-free grace period is coming to an end for most early adopters who purchased their Apple Watch S3 through a wireless carrier, reports are trickling in that their first billing statements reflect amounts generally in excess of $10/month.

On carriers like Verizon and AT&T, for example, customers are noticing additional fees and surcharges ranging from $2 to as much as $5 per month, MacRumors reported, while the added surcharges appear to vary depending on the carrier and market served.

For example, on Verizon Wireless in California, there’s an additional $1.55 per month in surcharges, government taxes and fees — in addition to the $10/month service charge. Meanwhile, across the country on AT&T in North Carolina, customers are being gouged for an additional $4.39 in fees and surcharges. 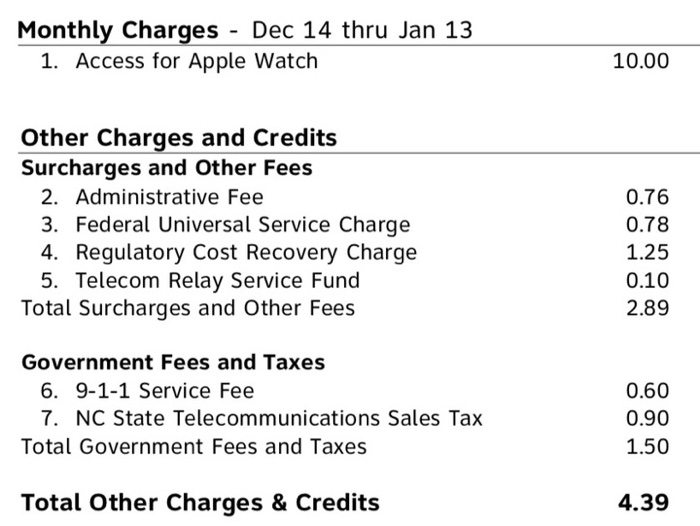 Is There a Way to Avoid the Extra Fees?

Unfortunately, while these surcharges are bound to frustrate most customers, it should be noted that they’re merely government-imposed taxes and fees regulated by the FCC — which all post-paid wireless customers already pay, anyways. Even though the Apple Watch S3 with LTE is linked to its user’s mobile number to enable wireless communication, the wearable still requires its own line of service (and, as a result, the fees) in order to operate on Verizon, AT&T, T-Mobile or Sprint’s network.

You can always deactivate LTE service on your Apple Watch S3 — in the event your wireless statement reflects too high of a fee. However you should be warned in advance that deactivating, and then reactivating at a later time, if you so decide, will ultimately result in an activation fee being applied to your account, as Macworld’s Michael Simon noted.

For example, Verizon customers who decide to deactivate (and, at a later time, reactivate) an Apple Watch S3 will automatically incur a $25 activation fee. AT&T will also charge $25, while Sprint will charge $30 and, interestingly enough, T-Mobile will not charge a fee for deactivating and reactivating the device.

Attempting to suspend service in hopes of foregoing the fee is also futile, Simon added, as Verizon will charge a $10/month “suspension fee,” instead, regardless of whether you’re using the service.

By now, most Apple Watch S3 buyers should be able to make an informed decision over whether the $10/month fee is worth it.

Of course, while neither Apple nor America’s wireless carriers were particularly truthful about the actual cost of Apple Watch S3 ownership, ultimately, each customer will have to decide whether these excess fees tip the scale.

Have you received your first wireless statement reflecting Apple Watch S3 fees? Let us know how you fared in the comments!