Due in part to the company’s increasing reliance on, and continued advocacy of, renewable energy as a source of power for its own operations, as well as actively advocating for other multinational tech-firms to get on board, Apple earlier this week was described by prominent environmental activist group, Greenpeace, as “the most environmentally friendly tech company in the world” for the third consecutive year in a row.

Of all the companies measured on Greenpeace’s Clean Energy Index, Apple was the overall highest ranking, across the board — logging an impressive 83%, due in part to the company’s comparatively low usage of fossil fuels and natural gas. In addition, Apple scored A grades in key areas such as energy transparency, renewable energy commitment, energy efficiency, and renewable procurement. And though Apple played a major role in advocating for other tech companies to increase their dependence on renewable energy sources, too, the company only received a B grade in advocacy. 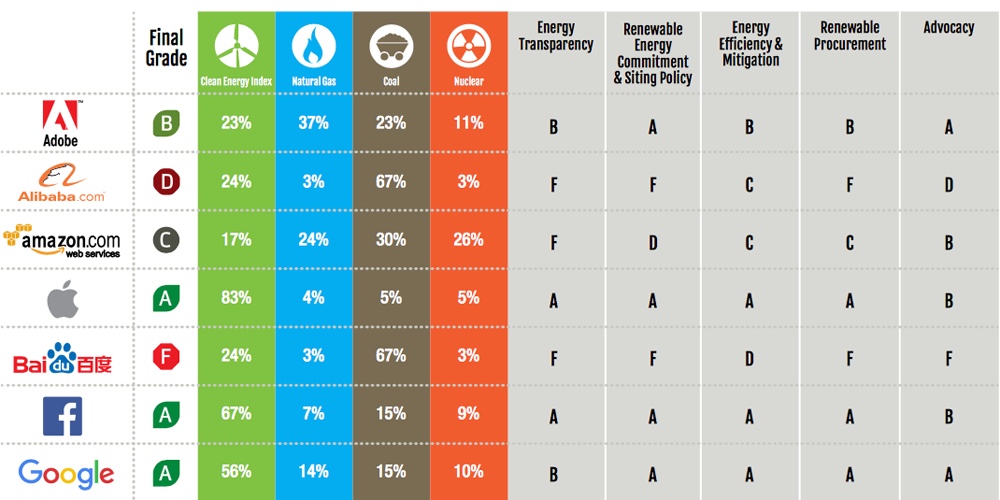 “Both Apple and Google continue to lead the sector in matching their growth with an equivalent or larger supply of renewable energy, and both companies continue to use their influence to push governments as well as their utility and IT sector vendors to increase access to renewable energy for their operations,” Greenpeace wrote.

Ever since the two firms experienced their brief “falling out” back in 2009, when Apple first came under fire from Greenpeace activists criticizing the iPhone-maker’s otherwise “tight-lipped” tendency to withhold environmental impact information, Apple has consistently been more open about its “behind-the-scenes” practices and its ongoing advocacy efforts to promote renewable energy and environmental awareness. In fact, back in 2012, Apple, Google, and Facebook made a joint pledge to transition the power source of all their operations, respectively, to 100% renewable energy. However, as you can see from the results of Greenpeace’s analysis, Apple is clearly a few steps ahead of the renewable energy curve.

While Apple continues to lead the way towards cleaner and more environmentally sound practices, however, other tech companies with operations in East Asia didn’t fare so well in Greenpeace’s analysis. For example, noting their high dependence on “dirty energy” sources, Greenpeace decried the practices of firms like Baidu and Tencent — granting them both F grades on the index. Samsung, the South Korean exploding-Galaxy manufacturer, interestingly enough, also earned a paltry D grade — apparently for the same reasons.