According to the latest statistics gathered by the World Health Organization (WHO) and published in 2017, an estimated 253 million individuals live with some degree of visual impairment — an estimated 36 million of whom are blind, and 217 million who’re living with moderate to severe visual impairment.

Apple has maintained a firm position of support for these individuals and others who endure some extent of visual or sensory impairment. The company’s macOS and iOS software, for example, is loaded with advanced Accessibility features meant to enhance and optimize its software for use by the sensory deficient.

In a patent application filed last week with the U.S. Patent and Trademark Office (USPTO), Apple describes a revolutionary new invention designed to even further improve the lives of those struggling with visual impairment — some of whom either currently use, or would otherwise be assisted by the use of, physical aids to facilitate their autonomous navigation.

Some individuals living with visual impairment, myself included, already rely on assistive devices like canes, seeing eye companion dogs, or other physical aids meant to assist navigating our everyday lives in absence of sensory input.

Apple’s invention essentially describes a highly-advanced wearable — equipped with sensors and software — that’s capable of collecting vital environmental data and assisting the visually impaired move about freely without the need for a cane or companion dog.

“A model of the environment may be generated and the model may be mapped at least to an input/output touch surface,” Patently Apple explains, suggesting the device could link up to an iPhone or other “touch-based input terminal” capable of providing the wearer with vital data about their environment. “Tactile output and/or other output may be provided to a user based at least on the mapping. In this way, a sensory impaired user may be able to navigate and/or interact with an environment utilizing the guidance device.” 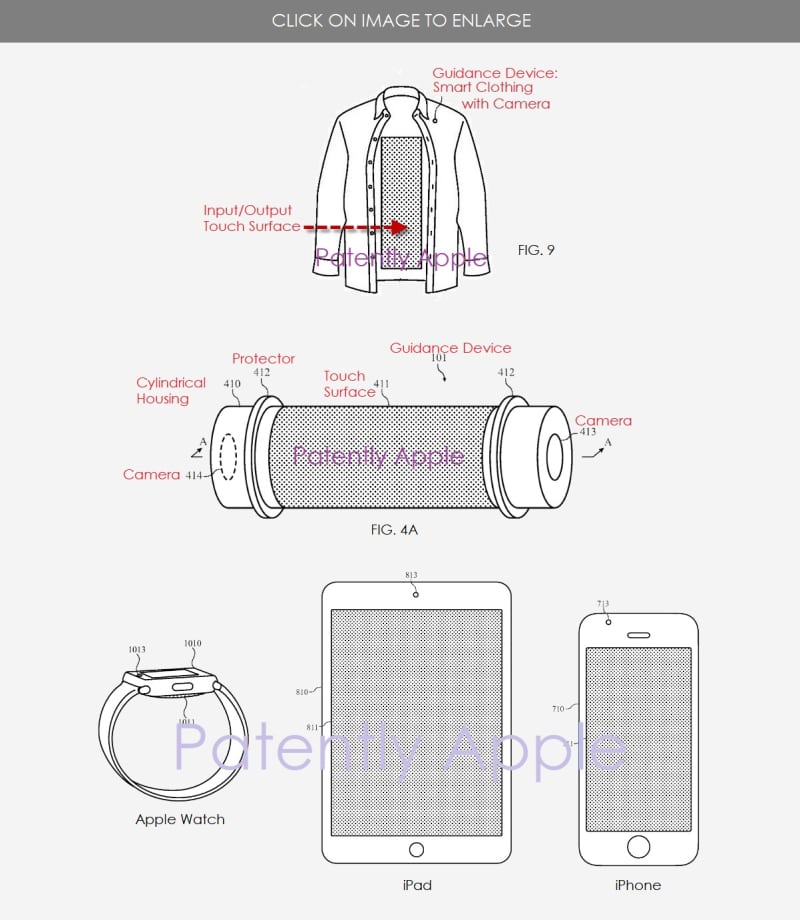 As illustrated in Apple’s patent (FIG. 9), the guidance device could take the form of a jacket or shirt equipped with sensors, including a camera, that are either tethered or wirelessly connected to an input/output ‘touch surface’ (i.e., an iPhone, iPad or Apple Watch).

Via this connection, the device would provide the visually impaired wearer with assistance that may be superior to that of traditional devices like canes, seeing eye dogs, or even a human companion.

In some embodiments, this tactile output may be palpable by the wearer directly on the attached touch-based surface; and in others, Patently Apple explains, the system may be able to provide audio notifications and feedback as they actively navigate and come into contact with the objects and people around them.

Apple credits Israeli inventor, Chananiel Weinraub, as the mastermind behind its invention — although the inventor, who’s also credited with patenting several technologies owned by Texas Instruments, has no official relationship with the Cupertino-company.

Seeing as this is an Apple patent, there’s no telling when or if a product like it might be commercialized — but considering the tech-giant’s persistent interest in making its customers’ lives easier, it’s not unreasonable to assume we might actually see a device like it someday.