Apple was awarded a new patent by the U.S. Patent and Trademark Office on Tuesday, which specifically covers methods of engaging and interacting with a Mac computer utilizing hand-based gestures.

Developed in collaboration with PrimeSense (the Israeli-based 3D imaging firm Apple acquired back in 2015), the iPhone maker’s patent takes its previous Face ID-equipped Mac patent to a whole new level: by specifically describing various ‘focus’ gestures, which would both initiate and facilitate the TrueDepth camera-assisted technology on a Mac laptop or desktop.

According to Patently Apple, Apple’s patent (No. 9,829,988) describes “A method, including receiving by a computer executing a non-tactile three dimensional (3D) user interface, a set of multiple 3D coordinates representing a gesture by a hand positioned within a field of view of a sensing device coupled to the computer, the gesture including a first motion in a first direction along a selected axis in space, followed by a second motion in a second direction, opposite to the first direction, along the selected axis. Upon detecting completion of the gesture, the non-tactile 3D user interface is transitioned from a first state to a second state.” 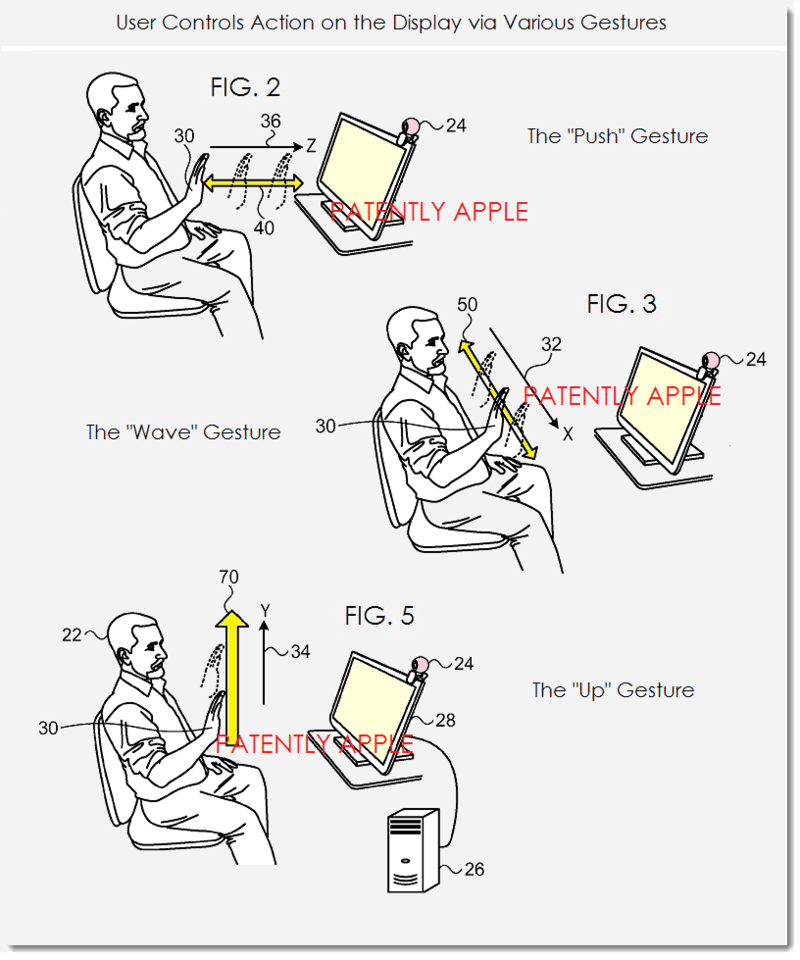 In simpler terms, as you can see in the patent image above, Apple is essentially describing a TrueDepth camera-equipped Mac computer that’s been calibrated to respond to various hand-based gestures. For example, the patent specifically outlines three “additional gestures” which can be executed to control various functions on your Mac, including “The Push Gesture” (Fig. 2), “The Wave Gesture” (Fig. 3), and “The Up Gesture” (Fig. 5), which is essentially a vertical lift of the hand.

While it’s certainly interesting to think that we may be able to control our Mac computers using various gestures one day, as with all Apple patents, we encourage you to take this one too with a grain of salt until further notice. While we’ve seen futuristic renders of Face ID-equipped Mac computers, and while we’ve even heard rumors that the technology will be coming to a future iPad Pro as well as a second-generation HomePod, what we’re looking at here is still very much a concept.

Of course, given consumers’ overall warm reception to Face ID on its high-end iPhone X, it’s more likely than not that we’ll ultimately see TrueDepth cameras integrated into other Apple products down the line.