Apple launched its official Machine Learning Journal earlier this year, which was designed as a blog-type forum for sharing the latest developments pertaining to the company’s ongoing artificial intelligence (AI) and machine learning projects. In its first post published July 19, the tech-giant showcased its AI ambitions as they relate to improving image recognition using neural networks, highlighting the complexities of AI-based neural net training of aggregated images.

Now, in its most recent blog post published Wednesday morning, Apple’s Siri team seeks to explain (in no uncertain terms) how the software powering its always-on “Hey Siri” command works on our iPhones and Apple Watches, and specifically how iOS and watchOS uses an advanced neural network to convert the acoustics (patterns and frequencies) of a users’ voice, while filtering out all other peripheral noises.

How Does ‘Hey Siri’ Work?

Hey Siri is based on a relatively complex system, which is almost exclusively regulated in the cloud via Apple’s servers — however it’s also reliant on a component dubbed “the detector.” Shown in the diagram below, Apple’s Siri team describes the detector as ‘the trigger,’ in other words, which acts as a “specialized speech recognition” engine that’s calibrated to run continuously in the background listening for its wake-up command, and filtering peripheral noise, by employing a powerful deep neural network. 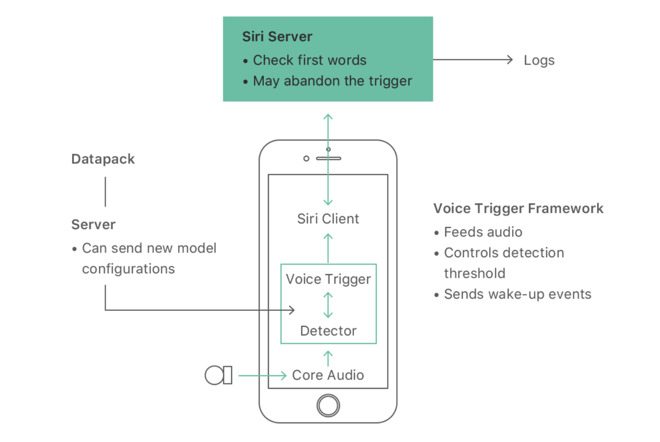 here are a couple of advanced tools Apple has baked in to help reduce error and maximize accuracy of the feature. For starters, the company has established several “sensitivity thresholds,” as outlined in the diagram below: 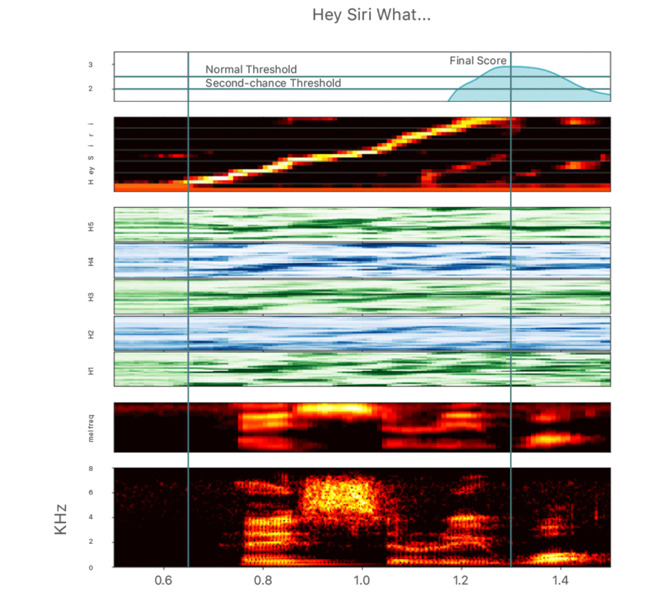 So if a voice waveform is registered in the ‘Second Chance’ (or median threshold), the software is calibrated to automatically issue a second opportunity for the user to speak, listening more intently for ‘Hey Siri’ the second time to ensure the phrase was actually spoken.

Apple has incorporated certain phonetic parameters for contextual-based and language-specific terms. For instance, Apple’s post notes that certain, similar-sounding words like “Syria”, “Cereal”, “Serious”, and “Seaweed” are always examined in their spoken context to minimize error.