Samsung’s latest flagship phone, the Note 7, is certainly impressive with an included stylus, wraparound display with slim bezels, beautiful design, and impressive list of specs and features. Samsung’s Galaxy Note 7 appears to be a dream device for many cell phone users… However, there’s one problem with the Note 7 – there’s a good possibility that it may suddenly and unexpectedly catch fire in your pocket. After several units spontaneously “exploded”, Samsung offered a voluntary recall of the phone. Then the US federal aviation administration and numerous airlines banned the phone on commercial flights. Then the US Consumer Product Safety Commission issued a formal recall. Then replacement phones began catching fire. Finally, Samsung announced today that it was halting all sales of the phone, and urged users to stop using their Note 7 phones and trade them in for another Samsung device. The whole debacle will likely end up costing Samsung billions of dollars, while iPhone owners proudly cling to their Apple devices.

But wait – now iPhones may be catching fire, too.

Apple is currently investigating several reports of iPhone 6s Plus devices catching fire in the last week. According to Fresno, California’s ABC30, iPhone 6s Plus user Yvette Estrada was sleeping when her phone, which was charging on her nightstand, suddenly caught fire. “I heard a sizzling, then we heard the pop and the whole fire was coming out of the screen,” Estrada said. Estrada’s husband put the fire out by throwing the phone in the sink and dousing it with water, but not before the phone had melted, damaged the dresser, a pair of glasses, and two Apple Watch stands. 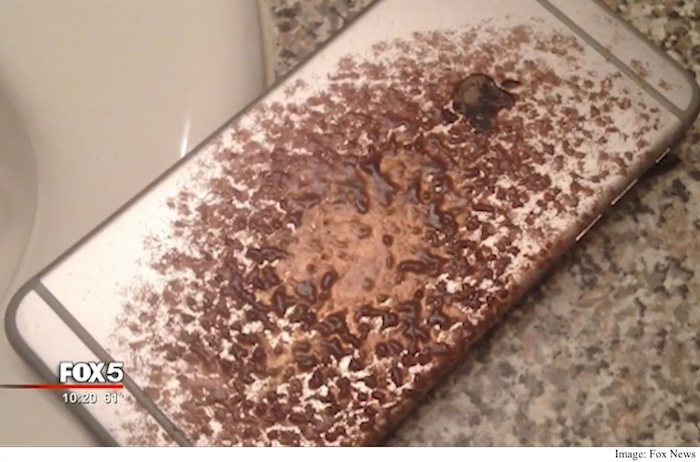 A second case last week occurred in New Jersey, when Rowan College student Darin Hlavaty claimed his iPhone 6s Plus exploded in his back pocket. “Right as class was starting, my phone started smoking in my pocket. It was a fire.” In another unconfirmed case, a Reddit user claimed that his iPhone 7 Plus caught fire while being delivered to his house – it arrived charred and unusable.

While reports of iPhones exploding certainly aren’t surfacing on the same scale as the Note 7, which has hundreds of documented cases, Apple is still looking into the matter. At the moment, it’s likely nothing to worry about for your average iPhone user, and Apple has reportedly replaced the few phones that have been damaged. In the meantime, you can keep using your phone as you normally would, but maybe keep the fire extinguisher handy just in case.