According to alleged design schematics that were obtained from case-maker, Miqodo, Apple’s upcoming iPhone 7s (though it will boast the same, 4.7-inch LCD display as its predecessor) could ultimately be slightly larger in both length, width, and thickness. The protruding camera lens bump on the iPhone 7s, meanwhile, has supposedly been thinned down considerably, according to Giga Apple. 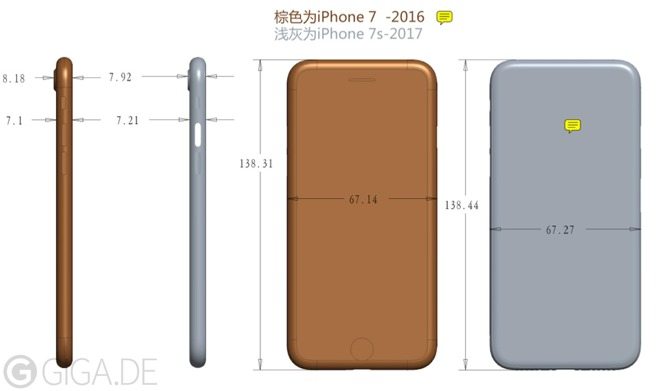 While there’s no indication why the iPhone 7s will be marginally larger than its predecessor, a reasonable assumption is that the increase is due to Apple’s inclusion of a new glass back panel on the device, which is an essential element that will allow the upcoming iPhone models to charge wirelessly via induction.

Unfortunately, no dimension information has leaked on Apple iPhone 7s Plus (yet). However if the current rumor turns out to be true, we can rationalize that it, too, will be slightly larger on all sides. We were recently treated to some iPhone 8 schematics, however, which revealed that the high-end flagship will clock in at 137.54 millimeters tall by 67.54 millimeters wide — dimensions that, as expected, will be similar to the iPhone 7s, with the slightly shorter height and thinner width being the result of the iPhone 8’s nearly edge-to-edge OLED display panel.

While it’s not uncommon for smartphone schematics to leak several weeks ahead of its launch, as case-makers often engage in ‘bidding wars’ to get a head start on manufacturing, we nevertheless recommend taking this information with a grain of salt until further notice.

If the schematics do turn out to be authentic, it’s likely that some, but probably not all, iPhone 7 cases will remain compatible with the iPhone 7s. But we’ll just have to wait and see what Apple says to be sure.

Read Next: Apple Watch S3 Expected to Feature LTE and Sadly Not Much Else
Read iPhone 8 Overview Sponsored