A forthcoming update to Microsoft’s Windows 10 operating system might include one of iOS’ most treasured features, according to a since removed blog post that was published Thursday morning to the official Windows Blog.

Though the original post was abruptly removed, a screenshot of the alleged ‘Control Center’ feature was nevertheless captured by Windows Central early this morning, revealing what appears to be an iOS-styled Control Center utility that may soon be coming to Microsoft’s Windows 10 operating system. As you can see below, by simply clicking on the Settings cog from the Windows 10 desktop, a future version of the OS will present users with a menu of options boasting many, but not all, of the same useful shortcuts currently available to iOS users when they swipe up from the bottom of the screen. 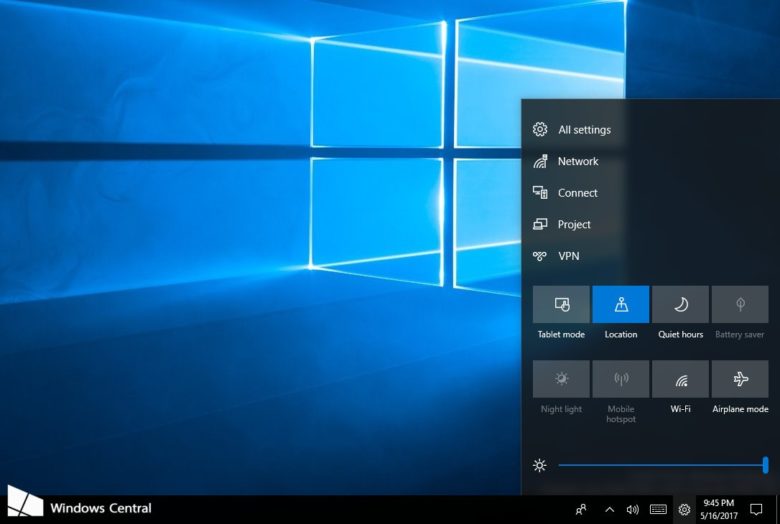 The Windows 10 ‘Control Center’ will potentially be coming in a future update to the Redmond, Washington-based PC-maker’s latest operating system — and will constitute just one of the major changes that are meant to make Windows 10 even more user-friendly and easily-controllable. While the feature will enable certain shortcuts such as a display brightness meter, toggles for certain connections such as Bluetooth, Wi-Fi, and more, unlike the iOS Control Center, Windows’ version is said to be fully-customizable.

The alleged Control Center feature, which could potentially debut as part of the upcoming Windows 10 Creators software update due out this fall, has yet to be confirmed by Microsoft — despite having been shared by the official Windows Blog. So while it’s highly likely the feature will debut sometime in the near future, keep in mind that Microsoft could change course at any time — and potentially even scrap the Control Center feature, altogether.

A Control Center was first introduced as part of iOS 7 back in 2013, and allows users to simply swipe their finger upwards from the bottom of the screen to reveal an extensive list of toggles and controls — providing quick access to important connections like Wi-Fi, Bluetooth, Airplane mode and more, as well as useful features like an LED flashlight, camera, calculator, and clock. The iOS Control Center also allows users to control display brightness, and in more recent releases of the OS, boasts toggles to enable or disable Night Shift, AirDrop receiving, AirPlay mirroring and more.