When you think of exploding phones, Samsung’s Galaxy Note 7 probably comes to mind. But a new report suggests that an iPhone 7 might have burned up in its box before reaching its owner.

The rumor comes from a Redditor named kroopthesnoop, who posted an image of a reportedly burned up iPhone 7 Plus on the Apple subreddit. The Reddit user said that a coworker preordered the new device, but it somehow caught fire and ignited before it arrived. Looking at the picture — and assuming it’s not faked — it’s certainly apparent that something went wrong. “I’m not certain, but something happened between the factory and delivery,” kroopthesnoop wrote on the post.

It’s worth noting that several other Reddit users have discredited the post. Some have stated that the burnt iPhone is, in fact, not an iPhone 7. Others have cited evidence such as the phone manual being on the back of the box, according to Firstpost. And, looking at the pictures, the burnt phone’s packaging does seem to be different than the packaging that we’ve seen for the iPhone 7 and iPhone 7 Plus. 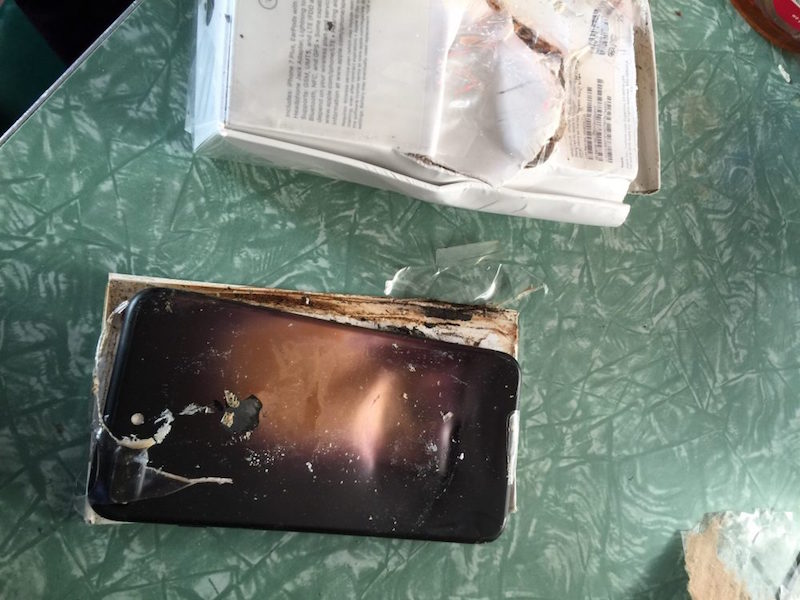 As to what could have caused such a catastrophic failure? Some have speculated that it was the result of the battery overheating after being left in an ultra-hot vehicle, while others pointed out that cargo cabin depressurization on a plane could have caused the battery to ignite, according to the Reddit thread. It wouldn’t be the first time that Apple phones have critically malfunctioned due to faulty batteries, but thus far, iPhone’s have never been the subject of a mass recall like the Galaxy Note 7, according to Tech.Mic.

As for the unfortunate recipient of said device, an update to the original Reddit post stated that Apple was working with AT&T to expedite a replacement. The user added that they would update the post when they learn more.

Whatever the cause, if this rumor turns out to be true, it does seem like an isolated incident, thankfully for iPhone 7 and 7 Plus owners. Assuming this post is actually true, it’s still never a good idea to run with speculation. So until we hear more confirmed reports of iPhone 7 devices exploding, we’ll call this one a freak accident.