One of the more anticipated releases (and mobile devices, for that matter) of the year is the Apple iPhone 7. Though Apple has yet to acknowledge its existence, a number of concepts, rumors, and questionable photos have hinted at its existence. And according to a recent series of images circulating the web, it looks as if there will be some big improvements for the new iPhone 7 model. And maybe even an iPhone 7 Pro model, too.

This week, slightly suspicious images appeared on a Chinese blogging site Sina Weibo, depicting what very well might be the next iPhone handset. The photos (seen below) depict what appears to be a front, side angle, and back shot of the newest and most anticipated Apple device. And on the 5.5-inch display model appears two of the biggest improvements: a dual-lens camera (also referred to as the iSight camera) and a Smart Connector.

AppleInsider helped clear up any concerns that this might be the final product. Upon some photo investigation, they uncovered that the photos look more like a mockup or a model phone as opposed to something that is production ready. 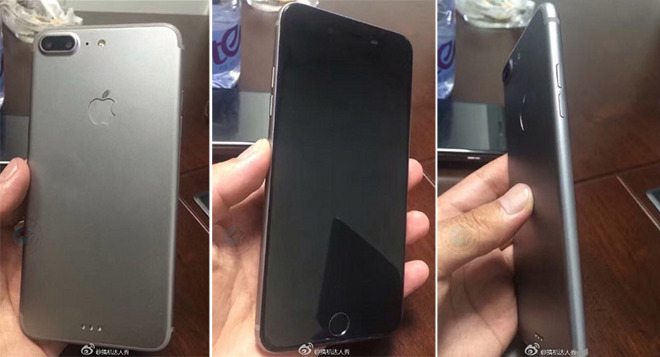 For instance, a number of previous leaks don’t match up to the current design. Additionally, there are a number of things flawed in this design: the distance between the iSight camera and both the microphone and the flash, the partially milled Smart Connector port, and even the rear shell Apple logo cutout. There is also the glaring absence of a mute button…but this has been done away with on the iPad and iPad Pro models.

Unfortunately, sources have been unable to trace the photos back to an original author, as multiple accounts on Weibo carry the photos with their own personal watermarks.

Although still unclear what the Apple iPhone 7 will look like (Apple hasn’t made an official announcement, after all), this photo leak gives us hope that the newest iPhone will come with a number of bigger and better features.

Do you think these photos appear to be legitimate? Or not?
Let us know in the comments below!