Rumors and fan concept art depicting an “Apple iRing” have been circulating on the internet for years. The Apple Ring is a bizarre, or at least unconventional, idea that has captivated the imaginations of many. It appears that the rumors and concepts were either based on truth, or Apple has seen the concept and decided an Apple Ring might be a worthwhile product.

The patent application for the Apple Ring was filed on April 1, 2015 and recently published to the U.S. Patent & Trademark Office’s website. The patent goes into great detail suggesting a device that would feature similar functionality to the Apple Watch, but much smaller, and obviously worn on one’s finger rather than their wrist.

The abstract concept of the device, as described by the patent, reads as follows.

A user controls an external electronic device with a finger-ring-mounted touchscreen that includes a computer processor, wireless transceiver, and rechargeable power source; the ring is worn on a first finger receives an input from a second finger, selects one of a plurality of touch events associated with the input, and wirelessly transmits a command associated with the touch event to the external electronic device.” 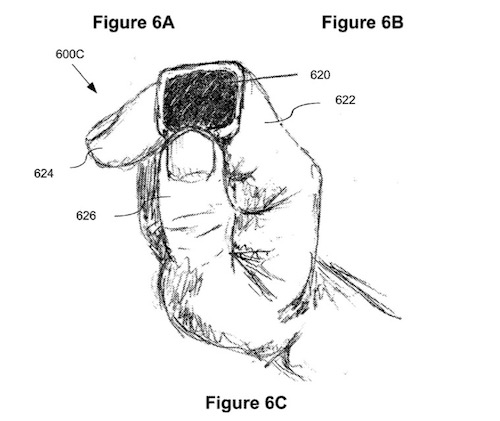 The hypothetical device includes standout Apple Watch features like a heart monitor, but would pack one feature the watch does not currently have: a camera. The patent goes on to explain where a camera might be placed on an Apple Ring.

In the illustrated embodiment, the camera is disposed on or in the ring computing device at approximately 90 degrees circumferential rotation away from the touchscreen or pad such that the camera faces outward when the user’s hand is closed into a fist, and such that the view of the camera is not obscured by the user’s palm; this placement may be ideal for capturing pictures from the point of view of the user…Another camera may be placed on the ring approximately 90 degrees circumferential rotation away from the touch pad or screen in the direction opposite the illustrated…this placement may be ideal for capturing self-photographs of the user. The shutter of the camera may be activated by a button, a gesture on the touchscreen or pad, by a voice input, by a hand gesture, or by any other input.”

It seems that Apple wants to spare users no shortage of ways to take a selfie. The device would use a combination of gestures, multi-touch, and voice input to control the camera shutter, amongst other Apple Ring functions. 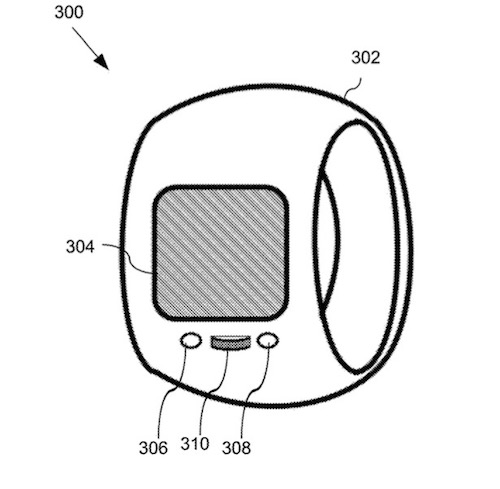 Because of the small size of the device, using a finger to operate the Apple Ring seems a bit tedious. Apple Insider explains the multiple ways one could potentially interact with the device.

When worn on an index finger, one could conceivably operate the ring’s touch sensitive surface with a thumb, but to make things easier the document also describes a mechanism akin to Apple Watch’s Digital Crown. Alternatively, built-in accelerometer and gyroscope modules are provisioned to accept gesture input with enough precision to facilitate handwriting capture. A user might even wear two rings to control multiple aspects of a host UI.”

The device could be paired to your iPhone through Wi-Fi, NFC, or Bluetooth. NFC would be used in new and innovative ways within the Apple Ring – The patent explains that two people wearing Apple Rings could authorize a transfer of $20 (or any amount of money for that matter) to from one to the other simply by shaking hands.

As ludicrous as the Apple Ring seems to most people, we might be surprised. The Apple Pencil is an innovative product that doesn’t seem life changing for the majority, but could work wonders for niche markets like design students.

The Apple Ring could be a cool and unique product, which would attract customers who aren’t interested in something more robust like an Apple Watch. Priced correctly, the once dreamed-of Apple Ring could become an everyday necessity just like the iPhone.