It was over a year ago when Apple briefly mentioned its proprietary Qi-based wireless charging solution, AirPower, for the very first time alongside its first-ever wireless charging capable iPhone X, 8 and 8 Plus.

And while the revolutionary three-in-one charging solution (which is engineered to power-up up-to two compatible iPhones and one Apple Watch) has unfortunately been delayed multiple times since September 2017, according to one of the latest research notes from TF International Securities analyst, Ming-Chi Kuo, Apple may be finally gearing up to release the long-overdue accessory “within the first half of 2019.”

But while the famed analyst is known for his historically accurate predictions of Apple’s imminent product plans, recent job listings published to Apple’s career portal suggest he might be a bit off on this one.

As recently as earlier this month, Apple published its latest in a series of new job advertisements for open positions in both the United States and New Zealand which appear to relate to its unreleased AirPower charging mat specifically.

One listing published on December 5, 2018, states that Apple is seeking qualified students for an open Wireless Charging Co-op position available at its Cupertino, California HQ in the Santa Clara Valley. 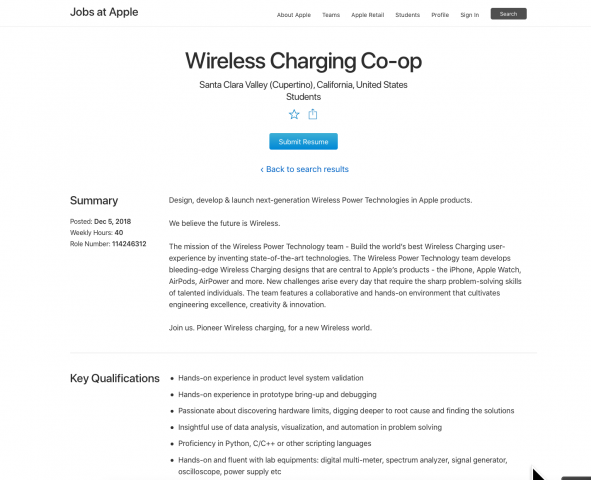 Another open position in Cupertino, which seeks a qualified and experienced “Wireless Power Systems Engineering Manager” appears to offer a similar job description of duties related to designing, engineering and marketing AirPower (and other Apple wireless charging products like iPhone, Apple Watch and the upcoming AirPods wireless charging case.)

Apple is likewise looking to fill several open positions, including two managerial engineering slots, in Auckland, New Zealand, which is the home of the wireless charging up-start, PowerbyProxi, that Apple acquired back in 2017.

What’s interesting is that while the titles, date of posting and locations for each job vary, the description for each of the six openings published between October 17 and December 5, 2018 feature a similar-worded description mentioning AirPower by name.

After being briefly addressed on stage by Apple marketing VP Phil Schiller back in 2017, AirPower was propositioned for an early-2018 release.

Sadly, throughout 2018, the device has been subsequently rumored and delayed multiple times amid reports of technical difficulties in its manufacture — and so there’s currently no telling when (or even if) Apple plans to actually release its AirPower wireless charging mat.

Despite a few early press releases briefly highlighting the product, Apple has yet to publicly or officially mention AirPower or anything concerning its whereabouts since earlier this year. And with just 3 weeks left until 2019 dawns upon us, we can pretty much rest assured we won’t be seeing it before then.

While these open Apple jobs clearly mention AirPower as a focal point of their duties, it’s worth noting that they neither confirm nor deny the wireless charging pad’s imminence — though they do confirm that the product is still an ongoing ambition for the company.

We last heard about AirPower back in late-October, when Kuo released his research note indicating that “Apple may launch new AirPods and AirPower in late 4Q18 or early 1Q19.” And while the analyst stopped short of providing further details, if he’s accurate, as is usually the case, then there’s still a fighting chance we could see AirPower drop within the next few months.