A little over a week after Apple was granted a permit from the State of California Department of Motor Vehicles to begin testing self-driving cars on the open road, a trove of internal documents obtained by Business Insider appear to give us a rare first glimpse of the underlying technology that will power the company’s self-driving car system.

Via what Apple has dubbed its “Automated System,” the documents reveal a number of key components, including information about the “Apple Automated System” as well as a point-by-point walk-through of the system’s “Development Platform Specific Training,” which, by law, the company will require its staffers to undergo before they’re authorized to get behind the wheel of a self-driving car.

“The development platform uses hardware and software to monitor surrounding objects and events,” an Apple official wrote on a government form. In addition to regulating the variable performance of an autonomous vehicle’s “dynamic driving task,” the Apple official added that this technology will effectively be capable of issuing electronic commands to control variable elements including steering, acceleration, and deceleration of the vehicle. Interestingly, according to the documents, the vehicles that Apple staff will be utilizing during the testing phase will be equipped with consumer video game-style components for maneuvering, such as a joystick, pedals, and a Logitech-branded steering wheel to emulate actual drive-by-wire performance. 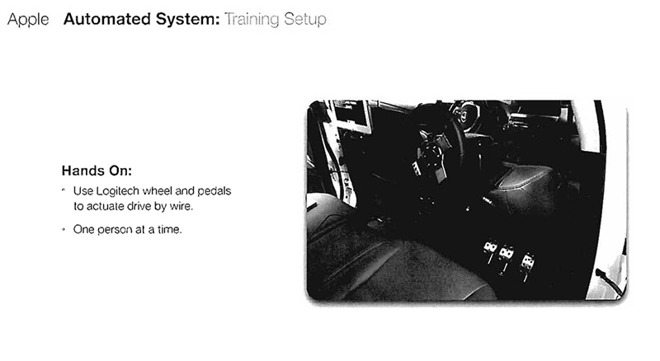 The documents also reveal details about the rigorous training process that Apple’s staffers will have to undergo before setting out on the open road, including step-by-step instructions on how to regain manual control of a self-driving car if circumstances dictate. While the underlying software/hardware infrastructure of “Autonomous System” is controlled electronically using a combination of joystick and software for maneuvering — Apple’s drivers need to undergo a total of 7 rudimentary tests in order to determine when, if necessary, they will need to take manual control of the vehicle.

According to California law, Apple (like Uber, Google, and Tesla) is required to train its staffers on how to override an autonomous vehicle system before they engage in actual test-drives. Drivers will undergo seven unique tests, inclusive of to “two practice runs and three trials” on a private course, in order to pass each of them. 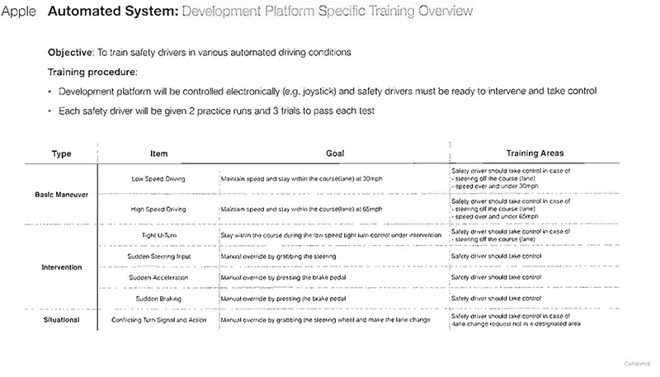 As you can see in the images provided, the tests are broken down into three categories, encompassing various elements of controlling a self-driving vehicle. These include “basic maneuvering” techniques when driving at low and high speeds; “intervention” techniques, such as initiating a tight u-turn, or sudden acceleration and deceleration; and a “situational” component, which appears to involve learning when a driver must take manual control of the Automated System. 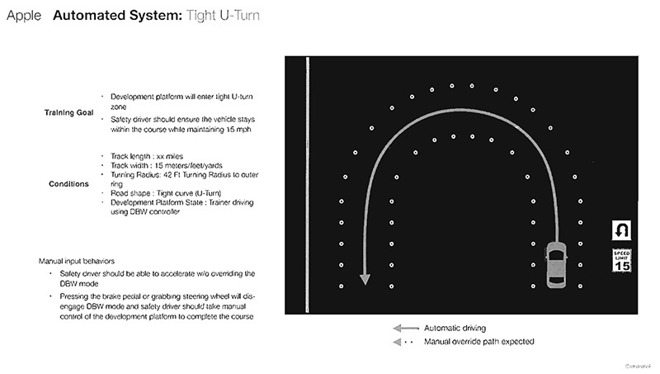 Apple’s DMV permit allows the company to employ a total of six designated drivers — most of whom possess Doctorate-level degrees specializing in the field of machine learning, according to the company’s permit application — who will get behind the wheel of up to three Lexus RX450h SUVs once they pass the various tests as outlined.