While digging through some code in the first developer beta of iOS 9, London-based developer Hamza Sood found some interesting lines of code that indicate significant improvements to the front-facing camera in the next generation of iPhones. 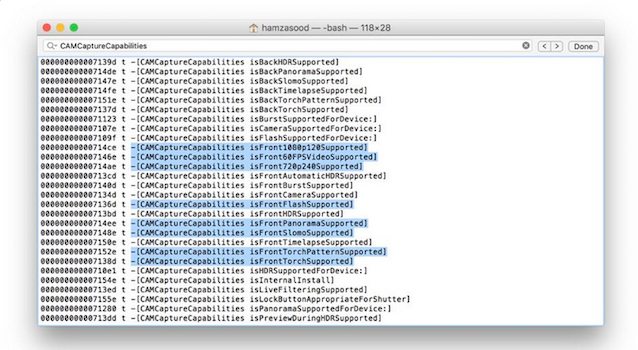 Sood tweeted out a screen capture, showing lines of code that indicate iOS 9 support for a front-facing “FaceTime” camera with 1080p video capture, up from the 720p already available on the iPhone 6 and 6 Plus. The code also indicates that 720p video will be available with a higher frame rate – up to 240 frames per second will be supported. Other features that are hinted at in the code include a front-facing flash, panoramic photo support, and slow motion video support.

Such a powerful and feature-rich camera is atypical for a front-facing camera. Companies often save such features for the rear camera in phones. However, with the current obsession with taking “selfies,” a more powerful front-facing camera may be a hit. That’s not to say the rear camera will be neglected, however – rumors began circulating late last year regarding the “biggest camera jump ever” in the next generation of iPhones, according to famed blogger John Gruber. The next iPhone, which is typically referred to as the “iPhone 6S”, is rumored to contain a dual-lens, 12MP camera, capable of taking DSLR-quality images, perhaps even with 3D capability.

According to Apple’s traditional release schedule, we should see a new iPhone sometime this fall, possibly in September. The new handset will likely coincide with the official release of iOS 9.