Apple’s newest iteration of the Apple TV has been available for a few months now, and after spending some time with it, here is my full hands-on review of the device that Apple claims will revolutionize television.

In usual Apple fashion, the company has finely polished some features already offered by competitors and the results show. Siri is implemented better than Amazon’s voice search on the Fire TV, and with the already massive Apple development community, the new Apple TV will have better quality apps and more of them than any Roku box could dream of. 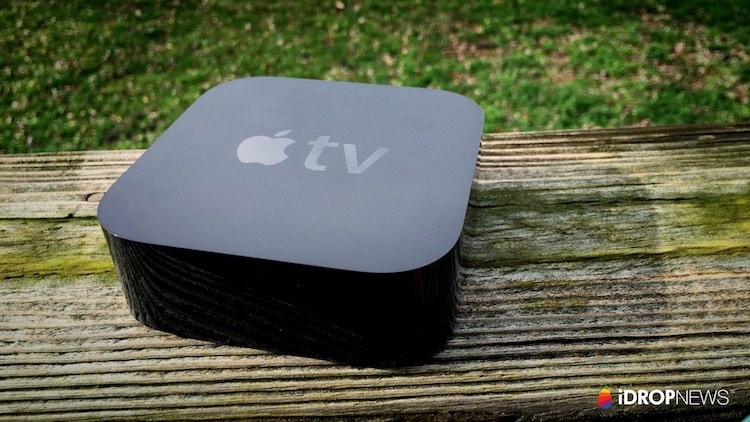 The new fourth-generation Apple TV, similar to its predecessors, is primarily for people who are already invested in the Apple ecosystem. With its more premium price tag and strong tie to iTunes, I can’t imagine this device appealing to non-Apple users. But as expected, the new Apple TV is easily the best streaming box for iPhone, iPad, and Mac users.

Let’s dive into what makes it great.

The new Apple TV runs on Apple’s dual core A8 chip that is also found in the iPhone 6 and 6 Plus. It is obviously a massive upgrade from the single core A5 chip that was in the third-generation Apple TV.

Obviously the chip is not as fast as the new A9 processor found in the iPhone 6s and 6s Plus, but it’s more than enough power to push the new Apple TV. There are 2 GB of RAM, which is the same as the latest iPhones and iPads, and works wonders for graphically intense apps.

As far as storage, the new Apple TV comes with either 32 GB or 64 GB, which is also a major increase from the 8 GB found in the third-generation Apple TV. The storage increase comes alongside one of the biggest new features of the new Apple TV, an app store. I’ll cover apps later, but suffice it to say that users can now download their own apps, which in turn could eat up storage. 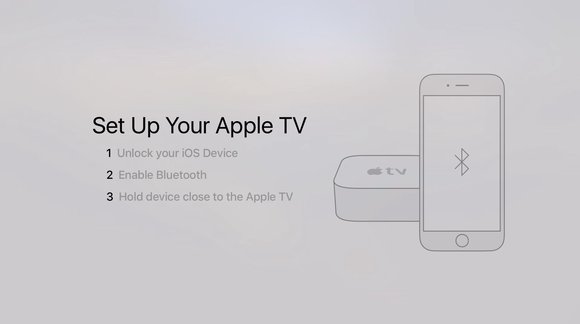 After booting up the Apple TV for the first time, you are given instructions to connect the Siri Remote with the TV. The new Siri Remote comes with a trackpad at the top, which replaces the directional pad in the old remote and is the primary form of navigation. You then use the remote to select the language you want.

Next, you are given two options for set up, “set up with device” or “set up manually”. For the sake of your own sanity, I highly recommend setting up your Apple TV with an iPhone or iPad. 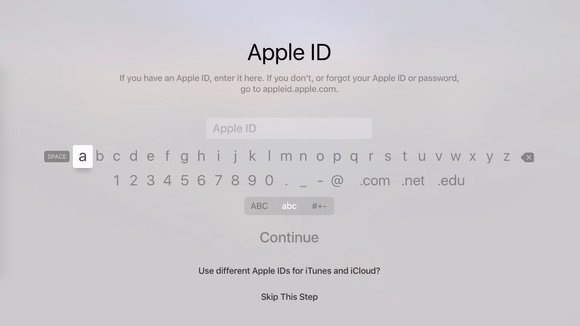 You will then be prompted to enter your Apple ID password on your iPhone or iPad, which is a ton easier than using the Siri Remote. 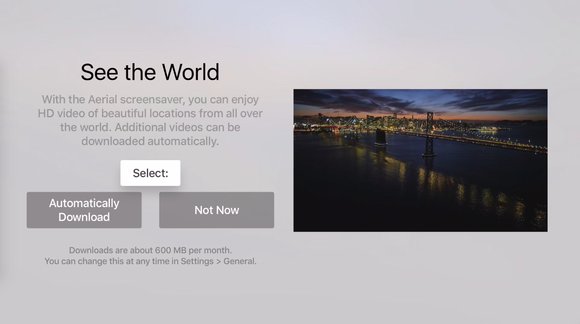 After that, the Apple TV asks if you want to use certain options including location services, Siri and the new breathtaking screensavers. Once you are through choosing those options, the Apple TV will go to the home screen and you are ready to roll.

If you choose the manual option, you will be forced to use the Siri Remote to type in things like your Wi-Fi password, Apple ID email and password, and so on. Needless to say, this experience is a drag, especially when you are excited to get your new device up and running.

After going through the set up process, you need to go to the App Store just like you would on a new iPhone and download the apps you want. You will probably be prompted to enter your Apple ID password again before you can download any apps. Thankfully, there is an option to save that password so that you don’t have to enter every time you want to download a new app.

After an app is downloaded you will have to enter your login information for any streaming apps like Netflix, Hulu, WatchESPN, and so on. At this point I absolutely recommend using the Remote app for iPhone or iPad if you can. Being able to use an iPhone to type in login information is miles better than using the Siri Remote.

The Remote app was notably not compatible with the new Apple TV at launch, but that has been remedied by a recent software update. 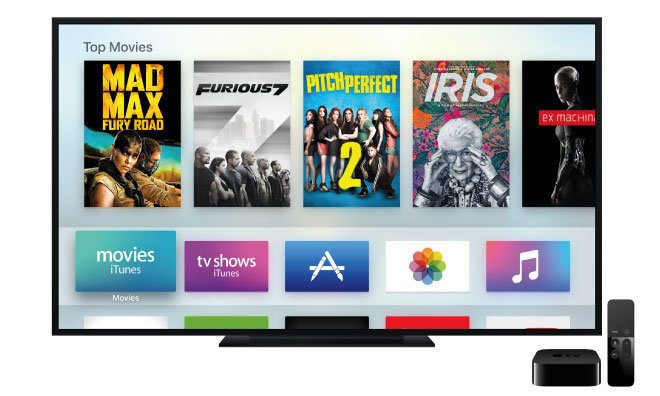 Tim Cook famously said during the keynote at Apple’s September event that the future of TV is apps, and this is easily the new Apple TV’s marquee feature. For the first time on Apple TV, developers can create apps for the device and submit them to Apple just like on an iPhone or iPad.

There is a very familiar App Store on the homepage of the new Apple TV and this is where you will find everything from Netflix to calculator apps. Because of the developer community that Apple has amassed, the Apple TV has the potential to far surpass every other similar platform in both the amount and quality of apps that it offers.

In my experience, the App Store was easy to navigate, easy to discover new apps and the apps downloaded quickly. The app store is a very welcomed and long overdue addition to the Apple TV.

The introduction of Siri to the Apple TV is also a major feature. The fact that Siri has made it to Apple TV even before the Mac is a bit mind boggling, but that’s a story for another day.

Siri is activated by holding down the microphone button on the Siri Remote. Siri listens to your commands while the button is held down and once you’re finished speaking simply let go of the button.

Siri on the Apple TV is not the full experience that you get on an iPhone or iPad, but the specific commands and features that Apple has included for the Apple TV are extremely useful. For example, Siri performs universal search across multiple apps that support the feature such as Netflix, Hulu, HBO Now and Showtime.

So, if you were to say, “Siri, play the last season of The Office”, you would be presented with the available options to watch the show across multiple apps. Of course, the apps must be downloaded and you must be signed in for the feature to work.

You can also narrow down your searches with Siri. For example, if you say, “Siri, show me family movies”, you can then follow that command up with, “only recent ones”, and your search will be narrowed down to only new family movies.

There are also a lot of commands that you can give Siri while watching a show or movie. You can tell Siri to move forward or rewind a certain period of time, turn on closed captioning or ask about who the actors and actresses are in a movie.

Another very useful command is to tell Siri to “turn down loud noises”. For action packed movies you might be watching at night while others are sleeping, this will turn down the loud noises of explosions, car crashes and the like while boosting dialogue so that you don’t miss what people are saying. I thought this was a very nice touch.

Of course, since the new Apple TV has Bluetooth capabilities, you can pair Bluetooth headphones to the device and listen to your media that way so that you don’t disturb others.

In my usage, I have easily found Siri to be the most useful feature of the new Apple TV. The ability to search using my voice as opposed to fiddling around in different apps trying to find what I want to watch is amazing and this feature alone has made the upgrade worth it for me.

The redesigned remote that comes with the newest Apple TV is full of features. Apple has dubbed it the Siri Remote, obviously touting the new Siri integration, but the new remote has added a lot more than that.

The build is a bit bigger than the old aluminum remote, but it is still very thin and light. While the bottom of the remote maintains the metal feel the top of the remote has been replaced by a plastic casing, which is certainly not as premium in my opinion, but Apple still makes it look sleek.

The top third of the Siri Remote is a trackpad that is a major upgrade to the old directional pad. The ability to swipe through lists is a lot better than having to click a button a hundred times. While watching shows and movies the new remote also has the ability to swipe through your media to fast forward and rewind, which turned out to be a way nicer feature than I was expecting.

The Siri Remote charges with a Lightning cable just like an iPhone or iPad which is nice. According to Apple, you only need to recharge it every three months or so. You can always check the battery level of the remote by going into Settings on the Apple TV.

Because the Siri Remote has Bluetooth built in, instead of using infrared (IR) like the last model, you no longer have to maintain the sightline with your Apple TV to use the remote. You can stick it in a cabinet, mount it behind your TV or put it anywhere else you can think of as long as it is in Bluetooth range.

The Siri Remote also has an accelerometer and gyroscope built in for gaming so in some games you can turn the Siri Remote sideways and steer a car. The feel is very similar to games that are already available on the iPhone and iPad.

I fiddled around for a while trying to get it to work, but I had no luck. The only way I eventually solved the problem was to unplug my old Apple TV from the bedroom.

Once I did that, the Remote app picked up the new Apple TV just fine, but it was a frustrating process and I still haven’t taken the time to figure out how to get both models working with the Remote app at the same time.

Gaming is another area of potential success for the new Apple TV. The games that are available and that will continue to be developed for the Apple TV will obviously fall short of dedicated console quality, but for most consumers that’s just fine. Gaming on the iPhone and iPad has become a major industry and the same may happen with the Apple TV.

Originally, games available on an iPhone paled in comparison to console games, but with the drastic improvements to mobile processors and graphics, many games on newer generations of iPhones and iPads are beginning to push into console territory.

The A8 chip found in the new Apple TV is able to handle 1080p HD gameplay with no problems and delivers a smooth gaming experience. For a lot of people, interest in dedicated gaming consoles has been replaced with their iPhones and iPads. It will not be surprising if the Apple TV becomes the primary gaming console in most people’s living room.

For Apple users, the new Apple TV is a no brainer if you are looking for a streaming TV box. The introduction of apps and Siri are well worth the $149.99 price tag and more than enough to justify an upgrade from the third-generation model.

As is, the new Apple TV is a really good product, and as time goes on it will only keep getting better as new apps are available and Apple continues to improve its other features. If you are already in Apple’s ecosystem, you won’t be disappointed by what the new Apple TV offers.

Read Next: iPad Pro vs Google Pixel C – Which Laptop Replacement Is Right for You?
Sponsored