While Apple’s next-generation Face ID tech is years ahead of its time already, the company is still looking into new and innovative ways to take advantage of its powerful new biometric security features.

Noting how “various governments are now issuing various forms of identification that are capable of storing identification information that can be used to authenticate a user,” the U.S. Patent and Trademark Office on Thursday published a new Apple patent application which specifically outlines how the company’s iPhone could double as a “next-generation e-Passport” for users when passing through airport customs and security.

Filed with the USPTO in March and published on Thursday, Apple’s patent (No. 20180225662) — titled ”Document importation into secure element” — essentially outlines how iPhone’s onboard “secure element” data storage system, in conjunction with radio frequency identification (RFID) technology, could enable the handset to function as an e-Passport or other forms of verifiable government identification.

As Patently Apple explains, most “modern passports” (commonly referred to as e-Passports) include “an electronic [RFID] chip” which is capable of storing its holder’s name, date of birth, and other information credentials. When passing through a port of security, officers on duty could place this e-Passport on an RFID reader to extract information in a bid to verify the traveler’s identity against credentials stored in an internal database.

Not only would the iPhone be capable of securely storing credential data (i.e. information stored on a traditional e-Passport’s RFID chip), but the system outlined would also be able to relay that information to an appropriate authority — allowing the user to confirm their identity using the data stored on their iPhone as a form of proof.

Apple’s patent (FIG. 1) roughly illustrates the technical method for how an iPhone would be able to securely store and retrieve this information on-demand. 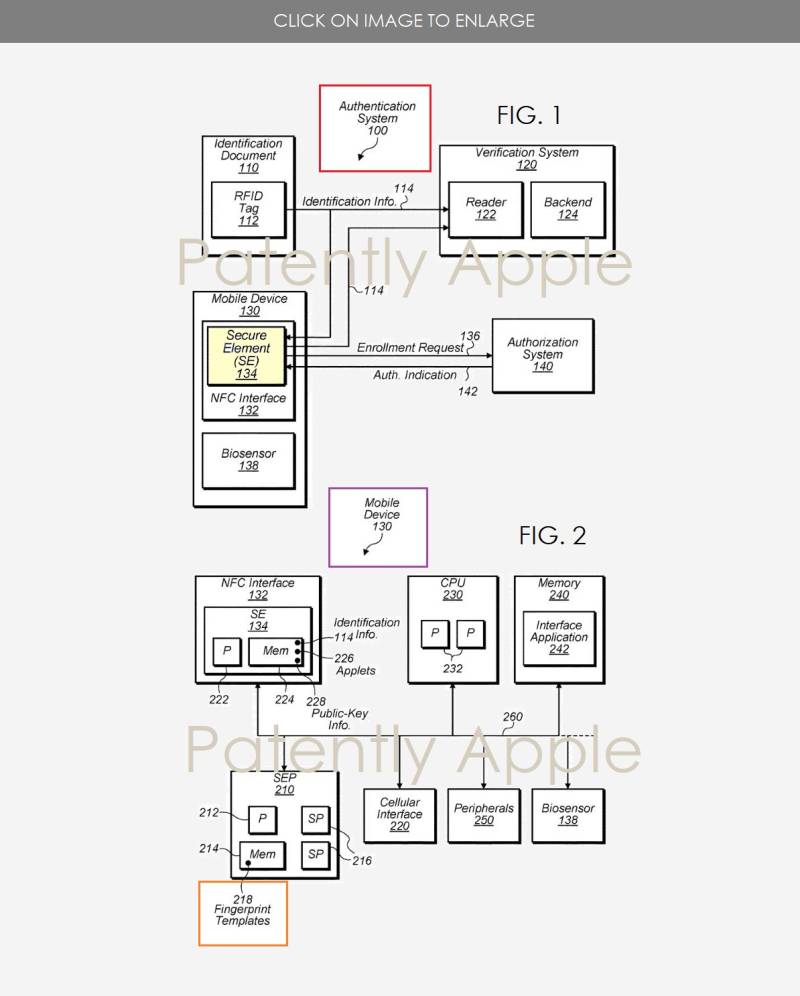 The iPhone (mobile device) may be authorized to store identification information requested on a physical enrollment application issued by the authority tasked with processing the document. The iPhone, meanwhile, equipped with a “short-range radio” (i.e., RFID or NFC), uses its onboard “secure element” to process and securely store this identification data, using RFID to acquire a “portion of credential information” from these forms issued by agencies like the DMV or TSA.

“Once acquired,” Apple Insider explains, the iPhone “issues a radio-based request” to the issuing authority, prompting officers to request the credential portion from the device. Once this requested information is delivered and approved, the iPhone’s secure element kicks in to permanently store and encrypt the information for future use.

Apple’s proposed system stipulates that when a user’s stored identification information needs to be retrieved or shared with the appropriate authorities, they’d need only align their device with the agency’s hardware RFID reader in order to extract key data like name, date of birth and passport number to authenticate their identity.

We all know Apple patents many more technologies and concepts than it pursues in the form of developed products — so consider this application, its proposed solution, and any future implications of it with a grain of salt until further notice.

It could very well be that Apple decides to pursue the commercialization of this e-Passport concept one day. And it’s certainly worth noting that recent iPhones already boast the requisite radio-based technologies (i.e., NFC) — as well as the “secure enclave” which is responsible for storing fingerprint and facial data collected via Touch and Face ID.

Still, in most cases, Apple’s patent application points to the use of futuristic hardware that’s not even commercially available yet. And, moreover, in order to make this system work as intended, Apple would need the support and cooperation of multiple government agencies to allow iPhone to serve a replacement passport.

Read Next: Samsung Finally Debuts the Galaxy Note9, But Is It Better Than iPhone X?
Sponsored