Domestic wireless carriers appear to be locked in a heated race to enhance and amplify their networks’ 4G speed and availability. The ‘big four’, for instance, which include Verizon, AT&T, T-Mobile, and Sprint, have made substantial improvements to their networks over the last six-months or so. And while Verizon continues to hold firm onto the top spot in both capacities, a certain magenta-colored underdog has emerged from the pack as a serious contender in recent months — and as a result, is now riding high on the list with Big Red, according to recent tests that were outlined in the most recent ‘State of Mobile Networks’ report from OpenSignal.

Utilizing its powerful OpenSignal app — a comprehensive iOS- and Android-based utility that was created to help users test the speed and strength of Wi-Fi and wireless networks available in their area — the firm was able to determine that Verizon and T-Mobile are currently in a tie for the first place spot as America’s fastest wireless networks. Over 15 million people around the globe use OpenSignal’s app, which helps the firm collect data on billions of different network speed and reliability tests — all while safeguarding user privacy, and providing a more complete picture of network performance.

And their most recent tests, which were carried out this month, have revealed that while all four of America’s biggest carriers have added to their 4G networks, Verizon and T-Mobile, in that order, have made the most improvements among them. 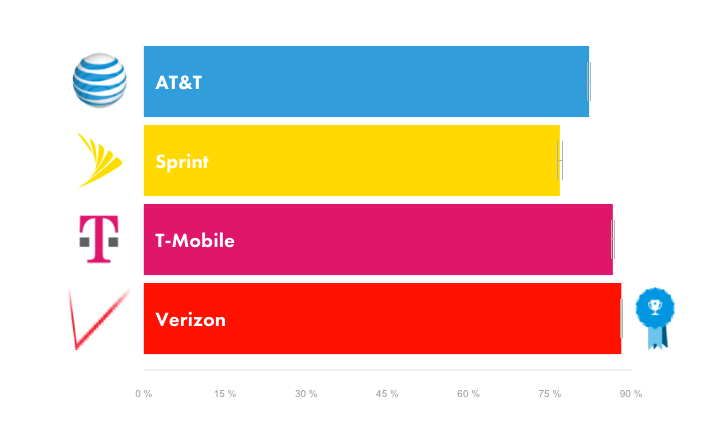 When it comes to network speed, however, the results of OpenSignal’s analysis is a bit more telling. Download speeds over 4G LTE were determined to be essentially equal between Verizon and T-Mobile, with the carriers scoring average download speeds of 16.89 and 16.65 megabytes per second (Mbps), respectively. Meanwhile, AT&T and Sprint, trailing in the distance, came in at an average of 13.86 and 8.99 Mbps, respectively.

However, when factoring in T-Mobile’s substantial 3G network speeds of 4.0 Mbps, in relation to Verizon’s 0.85 Mbps, the magenta-clad ‘Un-carrier’ actually exceeds Verizon’s overall speed for the first time, garnering 14.70 and 14.63 Mbps, respectively. AT&T and Sprint, also respectively, clocked in at just 11.69 and 7.14 Mbps.

So while the race to achieve the coveted yet frequently advertised title of ‘America’s best wireless network’ continues to show Verizon holding onto the top spot (at least for now), T-Mobile, which is the domestic subsidiary of Europe’s Deutsche Telecom, has shown that it will certainly not settle for second place without putting up a good fight. Of course, with the next evolution in wireless technology looming just over the horizon, we can only assume these tests will reveal an even fiercer competition in months to come.

Who’s your wireless provider? Let us know in the comments!