There has been lots of buzz surrounding Apple’s upcoming Night Shift mode set to debut on the iPhone and iPad in iOS 9.3. Much of the excitement is from users of the popular Mac app, f.lux, which implements the same concept as Night Shift. In fact, there are lots of people lashing out at Apple for essentially copying the idea, but that’s a story for another day. Either way, the feature claims to help users sleep better, so I dug into the science behind it to see if the feature is a gimmick something you should be excited about.

Most displays on electronic devices, including your iPhone and iPad, are designed to emulate sunlight, which is a problem when using them at nighttime. On the surface it makes sense that exposing yourself to that type of light at night would hinder your ability to go to sleep, but if you’re anything like me you’re curious to know why. So I did some research on the subject and here’s what I discovered. 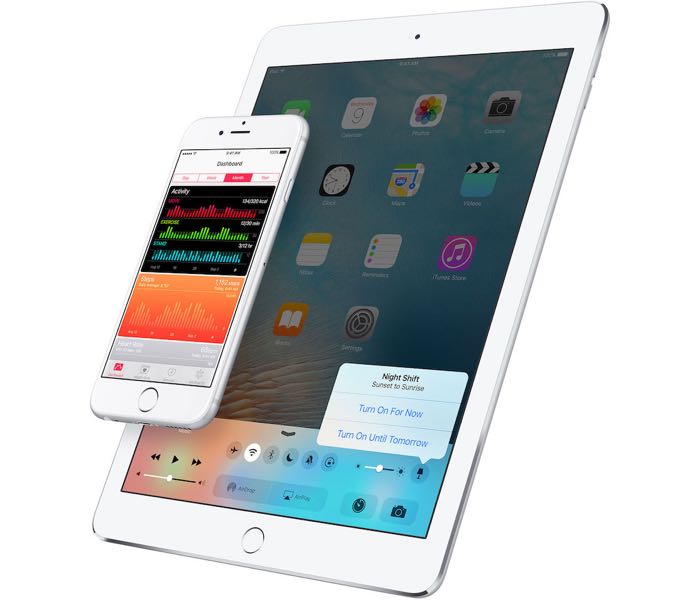 Research as to why blue light affects our sleep patterns began many years ago. One of the major breakthroughs was the discovery of a photoreceptor in our eyes called Melanopsin. It was a significant discovery because Melanopsin is sensitive to a broad range of blue and green light and when Melanopsin is exposed to such light it causes our brains to perceive daytime when we look into electronic displays, even at night. In comparison, Melanopsin doesn’t react the same way to warmer colors such as red and yellow so when our eyes are exposed to these colors our brains aren’t tricked into thinking it is high noon when it’s really closer to midnight. 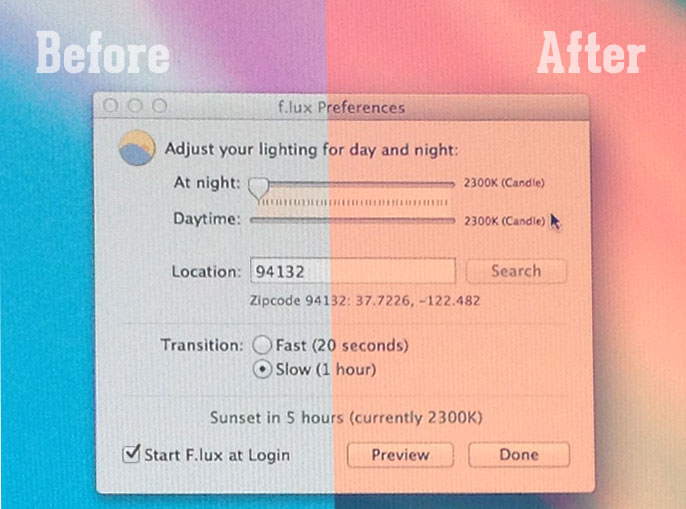 The results of these studies suggest warmer color temperatures create a smooth lowering of brain activity before bedtime, and using these warmer colors can be effective in a bedroom or other such environment where you want to facilitate a sense of relaxation. Keep in mind that many light bulbs put off blue light, so take that into consideration the next time you’re at the store picking those out. The increased popularity of smart light bulbs that change color could come in handy to help you wind down at night.

The Proceedings of the National Academy of Sciences (PNAS) is one of the most cited scientific journals in the world. Back in 2014, the journal published a study by Harvard Medical School comparing the effects of reading an iPad at nighttime versus a paper book. Ultimately, the team at Harvard discovered using light-emitting electronics, before bedtime prolongs the time it takes to fall asleep.

The study consisted of testing twelve healthy young adults over a 14-day period. Each participant was tested under two conditions. The first was reading on an iPad for four hours before going to bed and the second was reading a paperback book for four hours before bedtime. Blood samples were collected every hour from each participant to test melatonin levels, which is the natural hormone released at nighttime, which helps you go to sleep. Other measurements were made such as total sleep time, sleep efficiency, and the percentage of time each participant spent asleep. Each participant also rated his or her sleepiness on a scale every evening and morning. 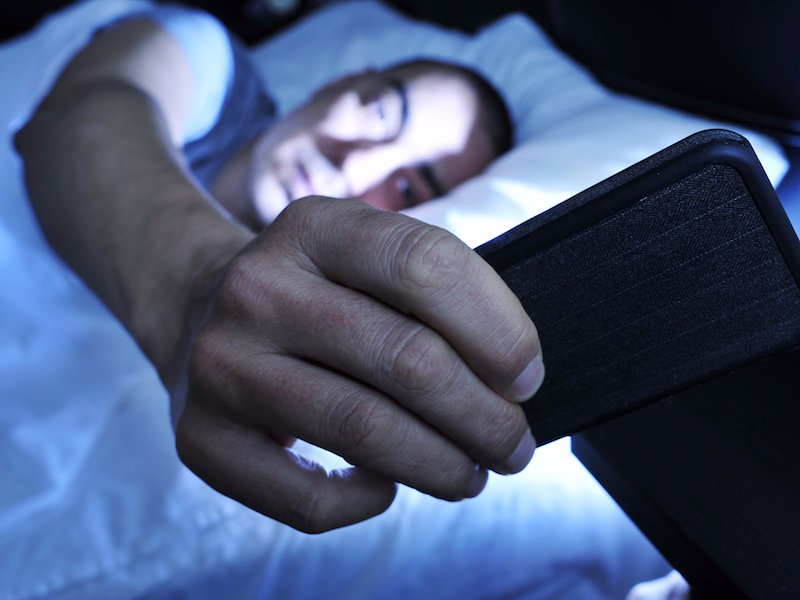 The study suggests, “these results indicate that reading an LE-eBook in the hours before bedtime likely has unintended biological consequences that may adversely impact performance, health, and safety.” The study went on to discuss the increasing concern of the findings since there are other recent studies suggesting people who either work at night or don’t sleep much at night are at an increased risk of certain types of cancer including breast, colorectal, and advanced prostate cancer.

In summary, the study determined using a light-emitting device before bedtime delays the circadian clock, suppresses levels of the sleep-promoting hormone melatonin, reduces the amount and delays the timing of REM sleep, all of which reduces alertness the following morning.

Even further back in 2012, the American Medical Association’s Council on Science and Public Health determined using electronic devices at night, “can disrupt sleep or exacerbate sleep disorders, especially in children and adolescents.” This study went on to recommend a solution. “This effect can be minimized by using dim red lighting in the nighttime bedroom environment.”

The science behind exposure to blue light at nighttime has become fairly popular and there are hundreds if not thousands of other studies that have been conducted on the topic. The two mentioned above are by two of the most authoritative sources, but teams from other reputable universities and medical research centers have tackled the issue and most end up at the same conclusion.

There is nothing inherently wrong with blue light, but you need to minimize your exposure to it at nighttime. During the day, blue light is a good thing. It keeps us awake by signaling to our brains that not time to start winding down, but at nighttime it creates a problem.

Enter Night Shift mode. Apple’s new feature is an attempt to remedy sleep issues by lowering blue light in the display while cranking up warmer lighting.

Night Shift mode will use your location to automatically shift the display to warmer colors from sunset to sunrise. That way, you can stay up reading or watching YouTube videos for a few hours before bed without disrupting your sleep pattern. If you are someone who’s sleep pattern is out of the ordinary, the setting will allow you to set your own custom schedule as well. 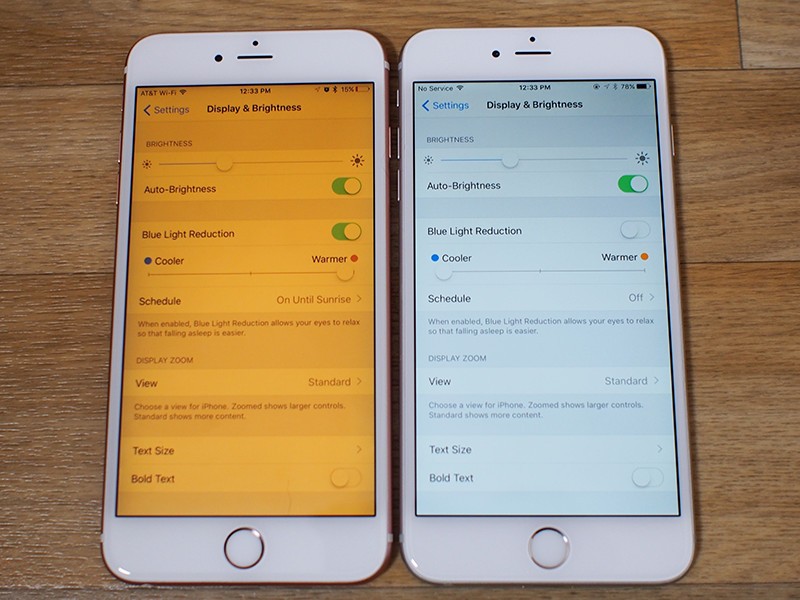 It is no secret that our brains are incredible things. If you have ever used f.lux, or any similar application, it takes a few minutes for your eyes to adjust to the change but it’s surprising how quickly you get used to the adjusted display. This is because our brains adapt to the change in color temperature and essentially reset the white balance of our eyes. This means that after a while of using Night Shift, the change in color is barely noticeable.

After using f.lux for a while on my Mac, I don’t know if I could go back. Similar to walking from a dark room into sunlight, switching the display back to normal after adjusting to the warmer color is blinding.

Why is This Important Anyways?

I’m sure you’ve had the experience of waking up just minutes before your alarm clock is scheduled to go off. This is your biological clock in action. It’s become common to refer to our internal or biological clock, but you probably haven’t taken much time to think about its significance. Your body is a complex machine that needs to stay in sync. When you skip meals, sleep, workouts or whatever else your body may be used to, it throws your biological clock out of sync and as a result you feel sluggish, irritable or just a little off. If you’ve ever experienced jet lag, it’s a perfect example.

Naturally, our bodies are used to being exposed to sunlight. Around noon, the sun is at its brightest and beating down blue light and as concluded in the studies I mentioned above, blue light suppresses the natural melatonin production which wreaks havoc on your biological clock. There is more to consider than just delaying sleep for a few hours. Your overall health is dependent on your quality of sleep.

I doubt you would disagree with me saying sleep is crucial to your health, but like with many things we don’t actively pay attention to it. Most of the studies I skimmed through before writing this article commented on the decreasing quality of sleep people are getting because of electronic devices. Without noticing, your sleep patterns have probably suffered over the last year or two.

While some of these are a bit dramatic, lack of sleep has been tied to all sorts of health issues such as depression, aching muscles, headaches, memory lapses or loss, increased stress, irritability, obesity and ADHD just to name a few. For the beauty conscious out there, lack of sleep can also result is periorbital puffiness, a.k.a. bags under your eyes. For children, it has been linked to temper tantrums. I’m sure you’ve got the point by now, but anything that is messing with your sleep could be significantly affecting your health.

I feel a little down after writing that list, so to balance it out here are some health benefits a good sleep routine has been linked to. An increased ability to learn, better focus, a stronger memory, endurance, a good mood and high energy levels. Doesn’t that just make you want to go take a nap?

The introduction of Night Shift mode has to potential to be a feature that has a positive impact on our lives. Once iOS 9.3 is released to the public, making sure Night Shift mode is working properly on your device is the first thing I recommend. To make sure your device will work with Night Shift mode, check out our article on the subject. However, Night Shift mode is the only thing that has a major impact on your sleep. Most doctors recommend getting between seven to nine hours of nighttime sleep. Any time you sleep beyond sunrise really doesn’t count. Other things like exercise, staying hydrated and keeping a balanced diet all affect your sleep quality.

I certainly find myself persuaded that Night Shift mode is not just a gimmick, mostly because I’m betting doctors at the Harvard School of Medicine are more well-read on the subject than I am. Also, I can’t imagine Apple introducing the feature without doing their own extensive research and being persuaded of the benefits themselves. So assuming you believe the research behind blue light exposure, Night Shift mode is a feature to get excited about.

For those of you who work late into the night and find it hard to wind down afterwards, Night Shift mode should significantly make it easier to get to sleep. I don’t think I would condone playing Candy Crush into the early hours of the morning, but if that’s your thing Night Shift mode will help you with winding down too. Since the continued use of electronic devices at night is inevitable, adding a feature like Night Shift mode to your nighttime routine has some positive health benefits.

Over the last few years, Apple has been increasingly serious about health and fitness. At its heart, the Apple Watch is a device to help us keep track of our well-being and the partnerships Apple has been creating with the medical community are encouraging. The company has teamed up to create some incredible apps to monitor health and make it easier to share data between doctors and patients.

More than just being a consumer electronics company, Apple has always prided themselves on creating technology that makes our lives better. It seems that under Tim Cook, the company focuses themselves on just that. I think Night Shift mode is another small step forward in the company’s mission to positively impact its customers’ lives.