It’s no secret that Apple builds some of the most powerful, durable and aesthetically pleasing computers on the market, though some would argue they’re also among the most expensive.

As with some of the best things in life, though, you get what you pay for when you invest in a Mac: Long-term performance, cutting-edge design, advanced technologies and award-winning software titles, all bundled up in aluminum shells.

Mac computers are also known for their reliability, as they’re capable of withstanding years of heavy use. According to the latest Computer Reliability Report compiled by RESCUECOM, Apple’s machines are so reliable they’ve been awarded a stellar A+ rating in the firm’s independent analysis.

How Is Reliability Calculated?

Several factors are considered in determining how reliable a computer is, however RESCUECOM’s analysis offers up an overall reliability score which is calculated by comparing the marketshare captured by a PC vendor (such as Apple, Samsung, or Microsoft) in relation to that vendor’s “repair share.”

In its analysis, Apple garnered a whopping 665 reliability score — equating to an A+, based on the company’s marketshare of 20.7 percent, which includes Mac desktops, laptops, and even factors in iPad devices, as well.

Apple received a repair share of 3.2 percent based on the number of repair calls placed into RESCUECOM’s personal call center.

Samsung, who garnered the second best score under Apple in the firm’s analysis, received a lower repair share of just 3 percent. However, based on the South Korean company’s respectively paltry marketshare of just 6.2 percent in the United States, it earned an A- based on the reliability score of just 270.

“The Samsung – Apple battle continues with Samsung coming in second to Apple but holding a higher rank than others due mostly to superior PCs like the sleek, elegant, and powerful ArtPC PULSE,” said David Milman.

Milman is the head of RESCUECOM — who describes itself as the “industry leader in PC repairs” and frequently provides this data based on their in-house service records with the goal of providing customers insight into which PCs are the most reliable. 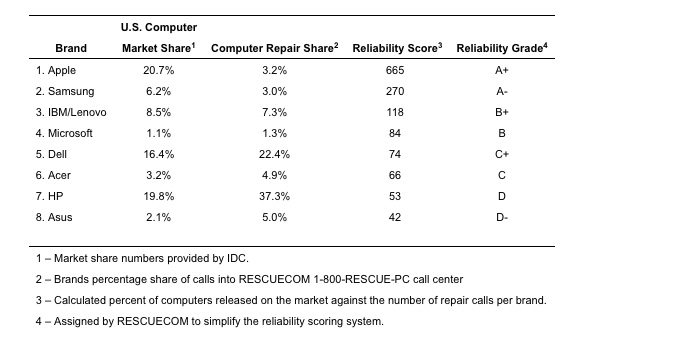 Meanwhile, ASUS, who according to Cision PR Newswire was at one point among the highest performers in terms of reliability, has fallen drastically in recent years. In the firm’s latest analysis, the Taipei, Taiwan-based PC-maker came in last place with a reliability score of just 42 (D-) based on its dwindling marketshare of 2.1 percent and a repair share of 5 percent.

Keep in mind that today’s analysis isn’t a representation of the broader market, seeing as the only data analyzed were the incoming repair calls to RESCUECOM’s own call centers — however, if anything, the findings only solidify what most of us already know: Mac computers are hands down among the best that money can buy.