Millennials have been credited with dramatically changing the landscape of television and how it is viewed in the US. Over the past few years, they’ve taken to forgoing traditional cable subscriptions in favor of Netflix and other over-the-top streaming services, and viewing more content on mobile devices and laptops. But that doesn’t mean they’ve cut the cords to their TV screens, which still remain the most popular method of viewing video in the US by a long shot.

Even as a variety of devices capable of playing video proliferate, a surprising new report by Nielsen states that a whopping 92.4 percent of the video-viewing done by US adults (aged 18 and over) still takes place on TV screens. More specifically, 82.1 percent of the time adults spent watching content (over 509 billion minutes) in fourth quarter 2016 occurred on a TV. An additional 10.3 percent (more than 63.6 billion minutes) of that time was spent watching movies or shows on a TV-connected device like the Apple TV and Amazon Fire TV. 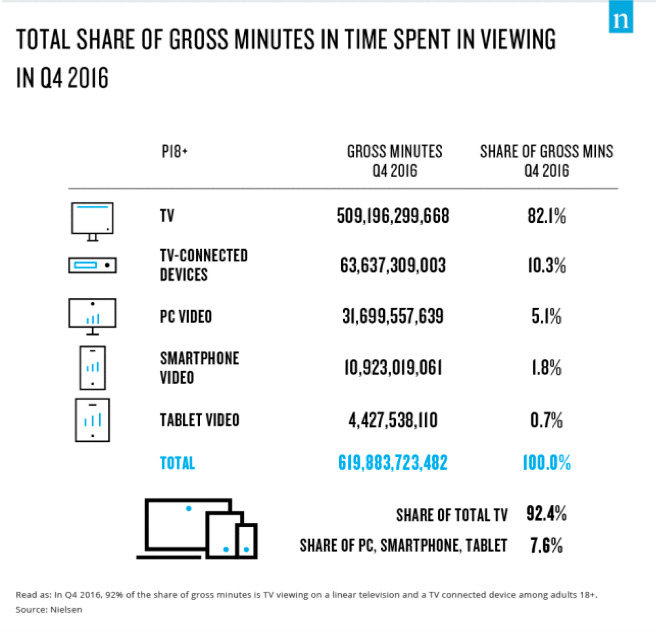 “The fact of the matter is that viewers use the TV screen for the bulk of their viewing and spend more time doing so than all the other platforms combined,” said Tom Ziangas, vice president of research at AMC Networks. “Sure, viewers have more options today, but when looking at platforms in a comparative fashion, it’s clear that consumers choose the television as the primary vehicle for content”.

By contrast, Nielsen found that the combined viewing share of computers, smartphones, and tablets accounted for less than 8 percent of the gross share of viewing in the last three months of 2016, in spite of the fact that they are portable. Computers, coming in at a distant third, made up 5.1 percent of video-watching minutes and the ubiquitous smartphone accounted for a mere 1.8 percent. And surprisingly, Nielsen observed that TV’s dominance as the viewing platform of choice held true for every age group (though it didn’t provide demographic breakouts of their data in the report).

“What we found was that contrary to the popular narrative that smaller screens were taking away time from the TV glass, when we looked deeper we found that overall time spent viewing on the TV had the most minutes among every age or ethnic demographic looked at. In some cases the share of viewing was as much as 97%,” said Peter Katsingris, vice president of audience insights at Nielsen.

While the report doesn’t offer reasons as to why TVs remain the dominant screen for watching video across every age demographic, it’s fair to guess that screen size plays a significant role. There’s no contest between watching a film the way it was meant to be viewed on a widescreen TV and squinting at one on a mobile device that can fit in your pocket– especially if you’re watching with friends.

Millennials (ages 18-34) may not have parted ways with their TV screens- which remain the centerpiece of many living rooms in households across the US- but their viewing habits markedly differ from those of adults 35 and older. For one, Millennials spend less time watching traditional cable television. As broadband internet spreads throughout the US, they’ve been abandoning traditional cable subscriptions in droves and have turned to streaming video on demand from TV-connected devices. TV-connected devices account for 23 percent of Millennials’ total video consumption compared to just 6 percent for adults 35 and older. As a result, Millennials spend just 66 percent of their viewing time watching traditional TV compared to 89 percent for adults 35 and older. Nielsen reports that the most popular brands for digital streaming devices are the Apple TV and Roku, followed by Amazon Fire TV and Google Chromecast.