In most of the world, iPad has one meaning: Apple’s flagship brand of tablets. Now, however, in the reclusive country of North Korea, iPad means something else entirely. A North Korean firm is currently advertising a domestically produced tablet under the “iPad” brand — a name that is currently trademarked by Apple. An ad for the product, called the Ryonghung iPad, ran in the latest edition of the DPRK-based Foreign Trade magazine, according to NK News.

According to the ad’s copy, the Ryonghung iPad is “now popular among customers.” Its features include reading “digital information, office work and documentation,” and the ad boasts that the platform currently hosts “more than 40 apps.” On the spec side, the Ryonghung tablet has 1GB of memory, an 8GB “hard disk” and a 4-core, 1.2GHz processor. It does, on the other hand, come with a keyboard and HDMI connectivity — two things that are currently only add-on features of Apple’s tablet. While the North Korean tablet apparently boasts “network connection,” the ad suggests that additional apps must be pre-loaded on SD cards. 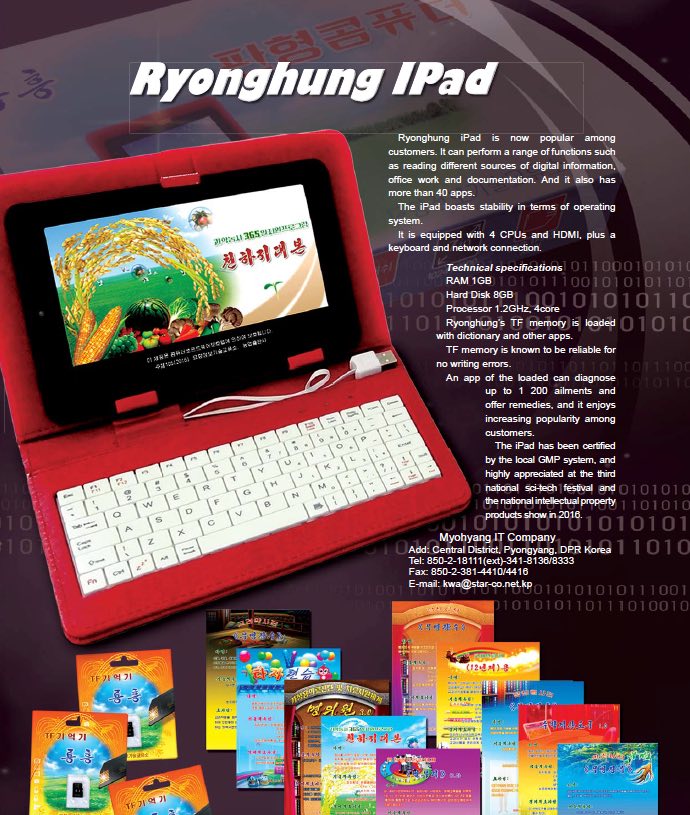 While the Ryonghung tablet is unremarkable in basically every aspect, it’s notable because it likely infringes on Apple’s trademarks, according to Cupertino’s trademark guidelines. It also seems to be the first widespread use of a famous American trademark in the country — though the country has produced a carbon-copy of Apple’s macOS system called “Red Star 3.0.” While the economy in the DPRK is tightly controlled, there exists a thriving gray market for foreign-made electronic devices, and North Korean companies apparently aren’t above “borrowing” ideas, features and names from American firms. The Ryonghung tablet also looks suspiciously similar to a heavily stripped-down Android device spotted in 2013.

But while the Ryonghung iPad may be a blatant breach of Apple’s trademark, the company that produced it either doesn’t care, or is banking on the fact that Apple is unlikely to head into the hermit kingdom to defend its trademark.