Apple prides itself on the App Store, pointing to its impressive and ever-growing number of titles, and even more impressive revenue stream for the company and its worldwide developer community â€” however a new report seeks to shed light on a concerning trend among some nefarious app developers, whose titles appear to advertise must-have services for iPhone and iPad owners, but are in reality just fraudulent attempts to clean your clock.

In his article titled How to Make $80,000 Per Month on the App Store, which was recently published by Medium, Johnny Lin describes how he uncovered a trend by which these developers have been able to create and publish ostensibly legitimate titles that promise useful services, but by exploiting the App Storeâ€™s inbuilt search algorithms, only seek to generate thousands of dollars in revenue at the expense of unwitting customers.

“I scrolled down the list in the Productivity category and saw apps from well-known companies like Dropbox, Evernote, and Microsoft,” Lin said. “But what’s this? The #10 Top Grossing Productivity app was an app called Mobile protection :Clean & Security VPN.”Â Noting the myriad of inconsistencies in the appâ€™s title, such as text capitalization errors, misplaced colon, and the conceptual nonsensicality of â€˜Clean & Security VPNâ€™, Lin went on to attest how he was almost certain the app was there due to a bug in the App Storeâ€™s ranking algorithms.

“So I check Sensor Tower for an estimate of the app’s revenue, which showedâ€¦ $80,000 per month?? That couldn’t possibly be right. Now I was really curious,”Lin said.Â Wanting to know more about the app and why it was there, Lin downloaded and ran the title, at which point he says he was prompted to initiate a “free trial” for a so-called iOS virus scanner. Once he tapped on the free trial offer, that all-too-familiar Touch ID authentication prompt followed, warning Lin that “You will pay $99.99 for a 7-day subscription starting Jun 9, 2017.” (Worth noting is that due to Appleâ€™s strict rules and provisions for individual apps, iOS does not actually require anti-virus software of any kind.) 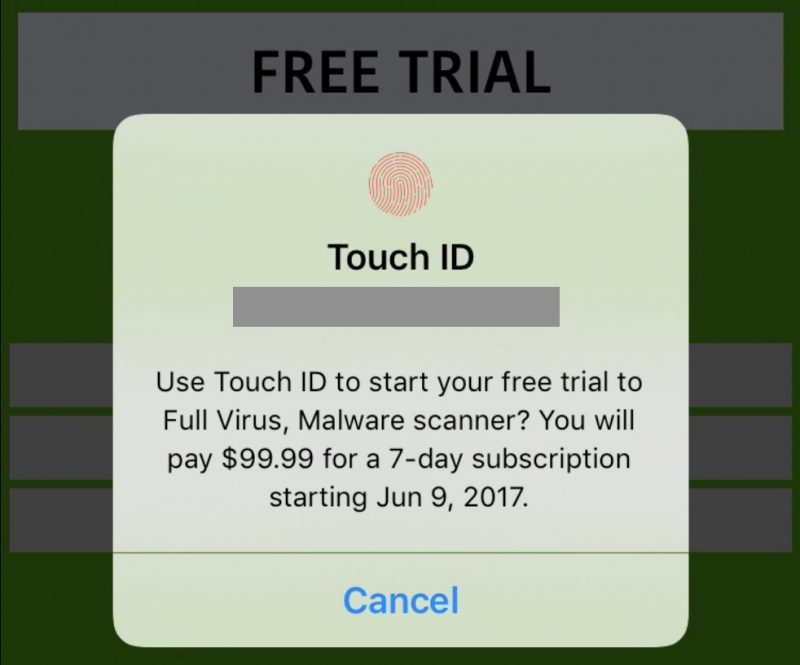 Lin explained that while Appleâ€™s app submission and approval process is particularly stringent, some deadbeat developers are still able to exploit the App Storeâ€™s search ads due to their inherent lack of approval or filtering process. He dug a bit deeper and discovered additional titles just like the â€˜Mobile protection :Clean & Security VPNâ€™, which suggests there may be a burgeoning trend among these types of apps showing up on the App Storeâ€™s Top Grossing app lists.

How to Protect Yourself fromÂ Fraudulent Apps

You also might want to spread the word if youâ€™re concerned, informing your less tech-savvy friends and family to keep their guard up when browsing and selecting apps to download â€” at least until Apple is able to figure out whatâ€™s going on and put an end to it.