Out of seven popular fitness trackers, Apple Watch was found to have the lowest margin of error when determining the accuracy of a user’s heart rate, according to the findings of a new study conducted by researchers with Stanford University and the Swedish School of Sport and Health Services, which were published this week in the Journal of Personalized Medicine.

The study, titled Accuracy in Wrist-Worn, Sensor-Based Measurements of Heart Rate and Energy Expenditure in a Diverse Cohort, sought to determine the accuracy with which leading wearable devices were able to measure heart rate — and, more specifically, as heart rate relates to energy expenditure (calories burned) as the result of physical activity.

What The Study Found

60 volunteers, including 31 females and 29 males, participated in the study — each of whom spent time wearing a variety of fitness trackers including the Basis Peak, FitBit Surge, Microsoft Band, Mio Alpha 2, PulseOn, and Samsung Gear S2 — while performing activities such as cycling, running, and walking.

The data collected via the wearable devices was then compared against a “gold standard” tracking method, such as an in-hospital electrocardiogram (ECG). Though an error rate of +/- 5% was applied to the data, it was nevertheless discovered that across all three modes of activity (running, walking, cycling), Apple Watch showed the lowest margin of error (at 2%) out of all other wearables tested. 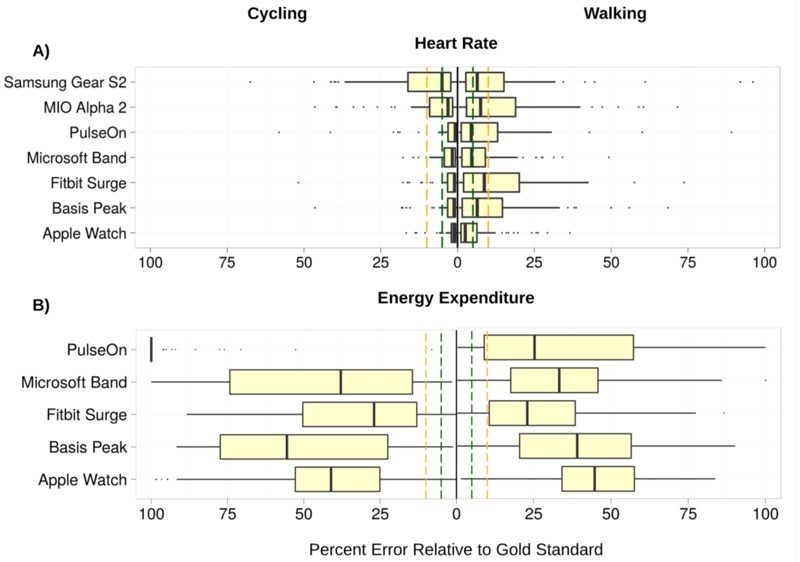 While Apple Watch garnered between 1.2 and 2.8% error in various samples, devices like the Samsung Gear 2, for example, garnered the highest average error rating of 6.8% — between 4.6% and 9%. Most notably, however, Apple Watch provided the most accurate heart rate measurement when used during the walking activity.

None of the devices tested, Apple Watch included, were able to provide an accurate readout of calories burned as the result of energy expended, however, with median error rates across all devices ranging from 27.4% for the FitBit Surge, to a whopping 92.6% error rate for the PulseOn.

“There are three principal findings from the current study. In a diverse group of individuals: (1) most wrist-worn monitoring devices report HR with acceptable error under controlled laboratory conditions of walking, running and cycling; (2) no wrist-worn monitoring devices report EE within an acceptable error range under these conditions; (3) of the devices tested, the Apple Watch had the most favorable error profile while the Samsung Gear S2 had the least favorable error profile,” researchers found.

The inherent findings come off the heels of several other recent inquiries into the Apple Watch’s efficacy as a heart rate monitor. Just two weeks ago, for example, researchers with the University of California, San Francisco, determined that Apple Watch was able to detect heart problems with 97% accuracy. Again, back in October 2016, the original Apple Watch clocked in with a 90% accuracy in reading user’s heart rates.