Apple’s ongoing work in the augmented reality (AR) space is no secret. Not only has the company been granted a range of technical patents covering its work in the development of AR, but rumor has it that the company is forging right along in its pursuit to develop a sophisticated pair of high-tech smart glasses — known from previous rumors and reports as Apple Glass — though the actual name could change once they’re ready to hit store shelves..

On Tuesday morning, the U.S. Patent and Trademark Office (USPTO) officially published 49 new patents which Apple was granted this week — the most inherently significant of which relates to the company’s ongoing AR developments.

Patent No. 9,922,446 was filed back in 2014 but published this morning. Titled ‘Method for Representing Virtual Information in a Real Environment,’ it seeks to describe novel methods of creating AR-based applications for use with hardware devices like iPhone or iPad or in conjunction with a pair of futuristic smart glasses.

“Apple’s newly granted patent covers their invention relating to a method for representing virtual information in a view of a real environment comprising the steps of providing a system setup with at least one display device, wherein the system setup is adapted for blending in virtual information on the display device,” Patently Apple explains, adding that “The invention also relates to a computer program product comprising software code sections for performing the method.”

AR is defined as a technology by which computer generated images are superimposed on top of a user’s natural view of their environment — thus enhancing their viewable representation of the real-world.

These images can embody any type of visually perceivable data, including objects, texts, drawings, videos, or even a combination thereof. “The view of the real environment or the part of the real environment,” as described in the patent, might be perceived as “visual impressions by user’s eyes and/or be acquired as one or more images by a camera.”

Apple describes using Point of Interest (POI) data as a computer generated image overlain on top of maps or turn-by-turn navigation data. Patently Apple notes that “several methods have been developed for improving visual perception and usability of blending in or overlaying POI information to a view of a real environment in augmented reality applications.”

Illustrated in Apple’s patent (FIG. 8) is an example of a real-world environment as it would be seen through the viewfinder of Apple Glasses (or a conjunctive device like iPhone or iPad). (FIG. 9) takes the same view from (FIG. 8) and superimposes POI data over it. 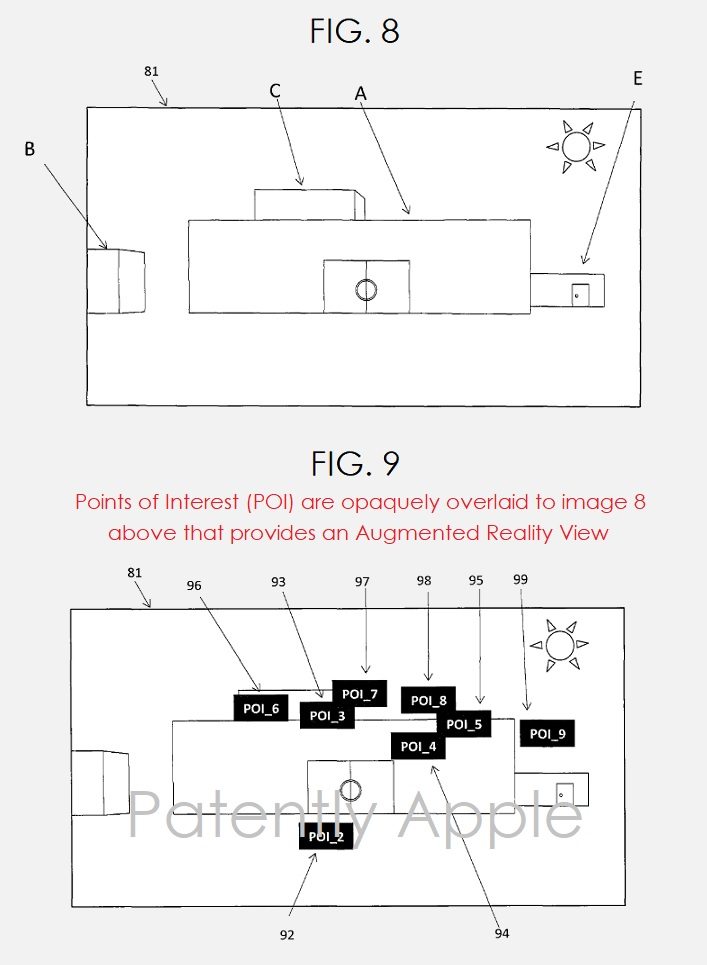 Apple’s patent literature explains the use of a camera-equipped “capture device” and its role in processing a view of the real-world environment. This view, for instance, could either be representative as a “visual impression by user’s eyes” or “acquired as one or more images by a camera worn by a user or attached on a device held by a user” such as iPhone, iPad or even Apple’s Smart Glasses.

“The overlaid or blended in information of the items of virtual information, e.g. POIs, and the real environment can be seen by the users in a well-known optical see-through display having semi-transparent glasses,” Apple explains.

We still have a long ways to go until a product like Apple Glass hits the market for mainstream consumption. But in the interim, we do have plenty of fascinating Apple Glass concepts to keep your interest piqued as we await the new wave of Apple’s AR tech.