Apple has historically been secretive when it comes to sharing the raw computing prowess of its devices. Cupertino will have us know that the latest-and-greatest generation device has 20% more of this and 2.5 times more of that — and we’re seldom if ever able to find the true product specifications online. Not so for the graphics processor (GPU) built-into Apple’s latest line of iMac computers, however, since the chip-maker has apparently divulged a ton of head-to-head comparisons between this- and last-year’s devices, revealing that AMD’s most recent Radeon Pro GPU is its most powerful yet.

Whereas Apple’s 2016 and 2017 MacBook Pro variants feature AMD’s Radeon Pro 450, 455, 550, 555, or 560 (in the top-tier configuration), the company’s recently unveiled iMac computers — at the least — feature one of AMD’s new Radeon Pro 570, 575, or the top-tier 580 GPU offerings, depending on your configuration. Of course, while the minor number bumps, themselves, don’t appear to suggest that any noteworthy changes in speed have taken place, AMD recently sought to shed some light on their actual, real-world differences. 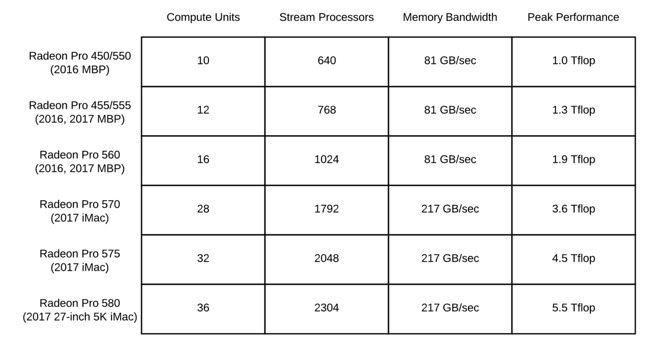 On paper, and even in graphically intense, real-world applications, AMD’s latest family of 570+ GPUs are among the most powerful and capable graphics units Apple has ever offered in an iMac — and they can be yours now, too, if the price is right..